We Can't Just Return To Normal

Last week was perhaps the ugliest political week I can remember. More so than the Bork hearings, more than the Clarence Thomas hearings, more than the aftermath of the 2000 election and "hanging chads". A fairly pedestrian fight over a judicial nominee morphed into something ugly and awful. A man was nearly destroyed, his family was threatened and the nation's division became worse than ever. To most of the nation, either a man was rightly confirmed after being unfairly smeared by Democrats or a serial rapist was elevated to the highest court in the nation. There aren't many people in-between. How can we continue to live together with such dissonance in our worldview?

As for me, I don't have any reason to doubt Justice Kavanaugh's word when he says that he is innocent of these charges and the longer this was dragged out, the less credible the charges became. Just as importantly, even if he had done what he was accused of it would not rise to the level of sexual assault and would in no way be disqualifying for a Supreme Court nomination 35 years later. In 1982 a handful of teens at a small party where no adults were present, engaging in underage drinking, and a boy getting a little overly enthusiastic with a girl would not have drawn any police scrutiny other than for underage drinking. Was Ms. Ford "assaulted"? I have no way of knowing and neither do you. I am not even sure that Ms. Ford is sure. She struck me as a little unhinged and mentally unhealthy, and I really think she was a useful patsy for Democrats to try to derail Kavanaugh. But then Trump backed him up, Kavanaugh refused to follow the script as a white man in 2018 America and immediately buckle and all of a sudden this took on a life of it's own.

In spite of the smear attempts, efforts at intimidation and the screeching of deranged women in the Senate chamber, Brett Kavanaugh was duly confirmed by the U.S. Senate in keeping with their Constitutional right and obligation of "advice and consent". Shortly afterward he was sworn in and starting on Tuesday will begin hearing arguments as an Associate Justice of the United States Supreme Court. May he rule on cases justly and within the boundaries of the Constitution as written and intended. 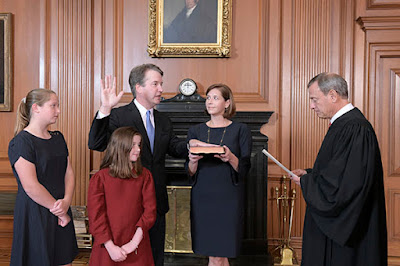 Saturday and to a lesser extent Sunday was a day where a lot of conservatives took a social media victory lap. It is kind of petty but after that fiasco you can understand being a little smug and lapping up some liberal tears. It is the world we live in. Today most of us are going back to our lives, work and family and whatever else.

I know that is the easy impulse. We have real lives and other things to worry about other than the latest outrage of the day but the Left lives in a constant state of fevered make-believe where it is always a good time to march in the streets. They don't think about anything else because they have nothing else in their lives. Even before the vote on Saturday they were scheming ways to "impeach" Justice Kavanaugh if they retake the House or to add a bunch of Supreme Court Justices and pack the court with liberals to offset the current conservative majority. They are talking about eliminating the electoral college or changing the way Senate seats are apportioned to states, and not just whack-a-doodle loons but "respectable" legacy media "journalists" are pondering this stuff on social media. From the moment they wake up until they go to bed, many "progressives" think of nothing other than how to undermine the foundations of this country. They remind me how Kyle Reese describes the Terminator from the original movie:

Listen, and understand! That Terminator is out there! It can't be bargained with. It can't be reasoned with. It doesn't feel pity, or remorse, or fear. And it absolutely will not stop... ever, until you are dead!

We cannot "come together" and reconcile with them. There is no middle ground to be found. The Left has already enshrined the Kavanaugh confirmation in their lore, the latest outrage against women by the white male patriarchy. It is holy writ to them now in the same way that the tale of Mohammad receiving the Koran from Allah is holy writ for Muslims. It will be spoken of in hushed voices and reverent tones when they gather. I wouldn't be surprised to see progressives gather on the anniversary of Kavanaugh's confirmation to light candles and scream at the sky. These are the same people trying to claw their way through the 13 ton bronze doors of the U.S. Supreme Court building while chanting "shut it down" (on a day it was out of session anyway).

We can't just go back to our normal lives. They will not let us. They will not let up now, just the opposite. The Left counts on the passivity of the Right in this country outside of times of high crisis like the Kavanaugh hearings. I know it is exhausting but the clock is ticking and the American experiment is on life support. We need the sort of commitment and fervor that we had during World War II. That is not hyperbole, this state of affairs is that serious. On every front Western civilization is under assault and once it departs this world, darkness and chaos will reign.

There is no normal to return to. Not anymore.
Posted by Arthur Sido at 1:51 PM