The news is all a-twitter about the "bombs" sent to a laundry list of leftist individuals and groups, from George Soros to the Clintons to Democrat multimedia propaganda division CNN. None of these devices detonated and probably wouldn't unless you strapped an actual explosive to them. The usual suspects in the media all provided an unbiased and totally not coordinated response. Screenshot below: 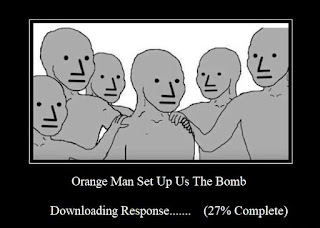 More "bombs" are being discovered this morning. And just like that the invading column of "migrants" from Honduras has disappeared from the media, a week and a half before the election. Oops, looks like we needed a narrative change!

As I said, the media response to this has been hilarious. Editorials were published, tweets were sent, all uniform as if they were written by one person, or perhaps ahead of time. The same media that looked the other way or tried to deflect blame as leftists have engaged in actual political violence for two years now suddenly is worried about inflammatory rhetoric. Calling for people to stalk and harass Republicans? No big deal. Letters of powder sent to Republicans? Squirrel! Trump supporters trying to get to campaign rallies attacked, struck with bike locks, being pelted with eggs, screamed at, intimidated and harassed? Just good harmless fun! Steve Scalise shot and almost dying? Crickets. Senator Paul being assaulted in his own yard? Maybe he was a bad neighbor.

The response from the Left was predictable but the response from the right was more interesting, and to me more encouraging. Everyone condemned the "bombs" but many, many conservatives were also immediately suspicious. People on the right have been fooled by these false flags, hoax hate crimes leading up the election, etc. for too long to automatically curl up and surrender when something like this happens. Well other than SuperGenius™ Li'l Ben Shapiro who said that being overly suspicious of these "bombings" was "deranged", thus proving again that he is little more than the court jester of conservatism. Fortunately the FBI and international police agencies are on the case...

Until we hear more I am going to remain deeply skeptical. None of the "bombs" went off. They all seemed to arrive in a coordinated manner and all to people that would never be in any real danger. People like Hillary and Barack Obama and Joe Biden don't go out to the mailbox to pick up the mail, assuming they are even at their home as most of them are out campaigning. All of them are protected by professional security. In fact if I wanted to make it look like a terror campaign without actually endangering anyone, this would be the way to go. On the other hand, actually killing political opponents wouldn't be that hard as there are an almost infinite number of potential targets on both sides of the political spectrum. I spent some time around the Congress some years ago interviewing for jobs and there are plenty of people right out in the open. They are at campaign rallies, traveling or at their homes back in their districts. If I were inclined to strike out at political opponents, there are plenty of ways to do so other than this asinine "bomb" campaign, not to mention it is pretty easy to make actual working bombs.

But a more important question to ask, as many others have pointed out, is "why". Why would anyone on the right do this with no chance of success and a decent chance of spending the rest of your life in the SuperMax? Republicans are surging in races around the country. Attention and a lot of anger was focused on the invading column marching through Mexico and that just energizes a Republican base already fired up about Kavanaugh. Trump's popularity is up. With momentum on their side, the right is looking like it has the chance to buck historical precedent and not only not take significant losses in Congress in an off year election but actually increase their majority margin in the Senate. That this is the act of someone trying to advance a right-wing political cause defies reason. That doesn't mean it couldn't be some random nutcase of course. It also doesn't mean that this couldn't be a false flag operation designed to draw attention away from the invading horde heading toward our southern border or to give the Left something to talk about to get their people to the polls since their entire political philosophy now is "Orange Man Bad". I am far from unbiased but I put the odds at better than 80% that this was coordinated by someone on the Left to be a distraction and the odds that anyone gets caught for this are pretty slim unless the bomber left finger prints on the envelopes or something else dumb.

The lack of any facts and the awfully suspicious nature of these "bombs" hasn't stopped the media from once again refusing to act like journalists and instead to immediately point the finger at Trump, thus proving for the one millionth time that his accusations against them are completely accurate. Trump isn't causing anyone to send "bombs" or be violent, at least not on the right. The opposite is actually true.

Trump isn't the cause of the super heated rhetoric and the vitriolic political rhetoric, he is the result of it. Most pundits remained baffled as to what happened in 2016 other than mumbling about angry white men but what we saw was the result of decades of pressure building. The anger and resentment has been building for years and it was accelerated by Obama, who took the opportunity to be a unifying force and instead became divisive. People in this country didn't suddenly become angry when Trump came down that escalator, they were already on their way. After years of seeing unrestrained illegal immigration, factories closing down, accusations of "white privilege", being told that we are ignorant rubes that cling to our guns and religion, cops assassinated, gay "marriage" forced on us by judicial fiat, schools bullied into letting boys into girl's locker rooms and our communities ravaged by the opiod crisis, many of us were completely fed up. Obama, a man that didn't accomplish anything noteworthy in his life until he was elected President and who never built anything in his life, stood in front of America and wagged his finger at us declaring that "you didn't build that". Trump came along and said that we did indeed build something great here in America and he would make America great again. He gave a voice to the voiceless masses and hope to people that had been scorned and hectored by their President for 8 years. He provided a sliver of hope that we could turn this thing around and I believe that temporarily avoided something ugly. People can only get crapped on for so long.

The Trump election was a release valve for vast numbers of Americans that had simultaneously been left behind and blamed for all of the problems of the country. What would have happened if Hillary had won? I don't know for sure but I can't imagine that the discontented tens of millions of people who voted for Trump would have shrugged and gone back to being ground into the dirt. The very serious division in this country didn't spring forth when Trump took office, it has been festering for a very long time. I am of the opinion that we have been in a cultural cold civil war for decades, but only one side seemed to realize it, and what we are seeing now is the manifestation of a new political struggle that has been building for many years: elites versus regular folks, urban versus rural, religious versus secular, men versus women, and yes even the shrinking white majority versus the coalition of non-whites. We are seeing the old political alliances collapse as big business sells out for the Democrats and working class whites abandon the Dems and vote Republican. Our politics now are populist, nationalist versus elitist, globalist. The division in this country is at levels I have not seen in my lifetime.

Trump is not the cause of this new, far more stark division in this country. He simply exposed it by giving voice to Middle America. In doing so I believe he might have delayed something far worse than intemperate tweeting.
Posted by Arthur Sido at 1:36 PM