Trump Fires A Shot Across The Bow Of The S.S. Neocon

Watch this snippet from Trump's campaign rally for Ted Cruz.

Nationalist is supposed to be a bad word, one not used in polite company. As someone that used to buy into the standard "conservative" rhetoric, I always tried to avoid the word or having any appearance of being nationalistic. We were told that more globalism would magically make the American economy stronger when all of our factory workers and blue collars laborers suddenly became computer programmers and mechanical engineers. In return for giving the Wall Street globalists what they wanted, we were promised what we wanted. We were played for suckers.

There is no free trade, and there hasn't been in my lifetime. There are no truly free markets on any scale, and there hasn't been in my lifetime. There is no international community, just a bunch of countries that work against the interests of American tax-payers while profiting by and being protected by those same American tax-payers. We were told to invite the world to come to America, cuz Statue of Liberty!, and that diversity would be out greatest strength but as we became more diverse, we became more conflicted and divided. At the same time we have been propagandized endlessly to defer or eschew entirely having children. My wife and I rejected that advice but a lot of others didn't and now we are facing a demographic crisis. Oops, now we have to bring in more immigrants or you won't get that Social Security you paid into your entire adult life. More on that later.

Trump's statement last night had the predictable response from Leftists, namely breathless hysteria and obligatory ominous talk about 1930's Germany (from people that couldn't find Germany on a bet). But it also ruffled the feathers of the small group of Beltway "conservatives" who hate Trump, and truth be told hate most actual conservatives. They have tolerated us for a while and even pretended to like us because they needed our votes but when we rejected the cast of clowns that they preferred in 2016 (Jeb!, Fiorina, Rubio, Kasich), they turned on their erstwhile "allies" with a vengeance and a viciousness that makes a lot of liberals look like lapdogs. Here is the chief among them, Bill Kristol, with what I guess he thinks is a terribly profound and clever tweet in response to Trump's use of the "N" word.... 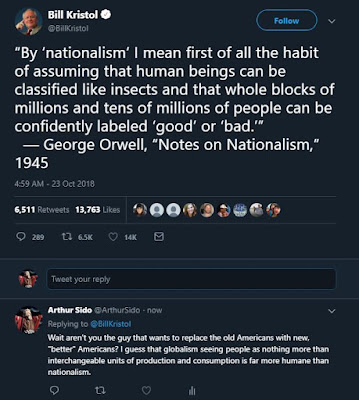 Kristol and his ilk, Jennifer Rubin, David Frum, Max Boot, etc. still pretend to be "conservatives" but when you look at what they are saying and who is agreeing with them....well this is what I said about that.

If you style yourself a "conservative" on twitter but all you do is retweet leftists and your replies are full of liberals agreeing with you, you might not be a conservative after all. Looking at you @BillKristol @JRubinBlogger @MaxBoot
— Arthur Sido (@ArthurSido) October 23, 2018


So there is that.

Trump's line in that speech was, whether he even realized it or not, a direct slap in the face of the disloyal opposition in the Republican party that prefers losing gracefully to winning because what they really care about is selling books, being on TV and getting invites to the best cocktail parties in D.C. and New York. Those are the conservatives that see Americans outside of their little urban enclaves as nothing more than interchangeable units of production and consumption. They very nobly permit us to buy their books and magazines but in return they expect us to shut up and do as they tell us.

Part of the great re-alignment we are seeing politically is between the elites and their oppressed allies/useful idiots and the non-elites that make up the rest of the country. Trump once again declared which side he is on and the responses from the elites leaves no room for misinterpretation. This is a winner-takes-all, existential struggle and there is no room for compromise. Not anymore.
Posted by Arthur Sido at 1:40 PM