....and you find a garden variety liberal. The latest from Bill Kristol.... 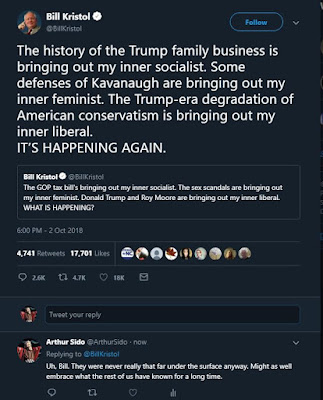 Keep in mind that at one time Kristol was considered to be a legitimate conservative. As it turns out, he is just a war-mongering liberal that latched onto the Republican party to push for wars.

Millions of us have dutifully been taking our marching orders from people like this, voting for whatever lackluster establishment empty suit they demanded we support. They promised us that this time would be different, once the candidates they allowed us to vote for got elected they would totally be on board with overturning Roe or protecting marriage. Instead what we got were a bunch of new wars that people like Kristol didn't fight but were happy to send the sons and daughters of middle America to bleed and die in. Oh and as a bonus tax cuts that benefited the donors that prop up the neocon think tanks and of course trade and immigration policies that gutted the middle America economy but made a handful of donors rich.

So please Bill, fee free to leave the Republican party. Feel free to follow other limp-wristed, bow-tie wearing, Nancy-boys like George Will in abandoning any pretense of conservatism. Go hook up with the Jennifer Rubins and David Brooks of the world and see what a powerful coalition you can form with a handful of urban neocons. We don't need you and we don't want you or your pompous smirk. Quit pretending and unleash the "inner liberal". We all see through you anyway.
Posted by Arthur Sido at 8:44 AM