In response to the ridiculous week long delay for an "FBI investigation" of a 36 year old allegation of sexual fumbling between two minors that had been drinking with no evidence, contradictory witnesses and tons of absent details, Senator Chris Murphy of Connecticut tweeted out this: 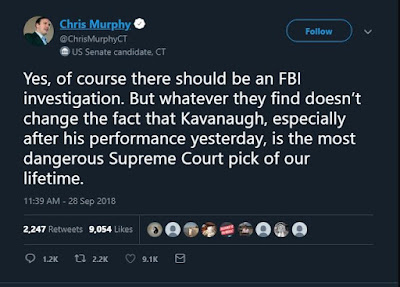 So set aside a moment what is obvious to anyone, namely that this is a sham deigned to keep delaying the nomination until the midterms and nothing that happens will change the vote of liberal partisans. Let me ask what is it that makes Brett Kavanaugh so "dangerous", given that we were told that Robert Bork would force women into back alleys to get abortions and that civil rights laws would be overturned.

A lot of it is just threat escalation. The Left has to keep exaggerating the "danger" of someone that might rule on the constitutionality of cases based on what the Constitution actually says to keep fanning the flames of rage and fear that drive their jihadis in the antifa and "pussy hat" brigades. This is a short attention span generation that requires an infusion of combustible rhetoric regularly or they get bored and go back to playing Fortnite. When your foot-soldiers are hyperactive young adults you are going to have to keep plying them with energy drinks or they lose focus.

But the real "danger" he poses was on display in his remarks at the farce of a Senate hearing this week. He was angry and worse he was defiant. He was accused and he was slandered and he fought back. That is not how the playbook works. The way it is supposed to work is that a Republican gets accused of something and is supposed to immediately back down and apologize. He must never push back or defend himself. That is how things have worked for decades in Washington and the current crop of mostly spineless, prissy Republican Senators is a testament to this. Republicans are supposed to be Mitt Romney, empty suits without a shred of backbone or self-respect that will get punched repeatedly without defending themselves. This is also why Trump is so dangerous to them. When the Left accuses him of racism or misogyny or whatever, he doesn't curl into the fetal position and beg forgiveness. He fights back and he often escalates the rhetoric. This has thrown the entire system in D.C. upside-down. Not since Reagan has there been a Republican President or significant leader that wasn't predictably compliant. I love this exchange, Reagan for his faults didn't take crap from anyone.


Now? Can you imagine Mitt Romney or Marco Rubio standing up for themselves like that? Please.

What makes Brett Kavanaugh so "dangerous" is that he is, not to put too fine a point on it, a conservative white man that was subjected to the same slander countless other Republican men have faced and instead of backing down he pushed back and stood up for himself and for his family. That is the genesis of the talk about him having "anger issues" all of a sudden. The Left is terrified of men that don't follow the script of groveling and bowing. As I have said on a number of occasions, I have found Judge Kavanaugh's response to this point to be incredibly restrained. If you accused me of sexual assault in the 80's in a transparent attempt to preserve your own political power and in doing so subjected my wife and children to death threats, I can assure you I would not be nearly so restrained as the Judge.

Many, many men around the country watched Brett Kavanaugh and realized that it could be them or their sons some day. Many, many women realized it could be their husband or son. That frightens them but it also makes them very, very angry. The Left cannot back down now because Brett Kavanaugh is a threat not just to their sacrament of abortion, he is a threat because he dares to stand up for himself. He upends the cultural narrative that white men are supposed to rend their garments and get slapped around because of the actions of other men centuries ago. That cannot be allowed to stand. This entire circus is not about Brett Kavanaugh. It is not about Dr. Ford who struck me not as credible but actually rather disturbed and sad. It is a proxy fight and Kavanaugh has shown a lot of men that they don't have to let the Left keep kicking sand in their faces anymore.

That is what makes him so "dangerous".
Posted by Arthur Sido at 9:48 AM