It is the anniversary of 9/11/2001 and like so many people it seems hard to me to comprehend that it has been 17 years since the events of that fateful day. In just another year, babies born on September 11th will be old enough to enlist in the wars started following that day.

I am not going to spend time memorializing the dead or reminiscing about where I was. What I want to look at are the years that have followed the attacks. Every morning for the last 16 years when I wake up on September 11th, it seems like Groundhog Day. 5 years, 10 years, 15 years and we are still at war.

The wars in Iraq and Afghanistan are never ending. Sure we mostly drew down from Iraq and some from Afghanistan but we are still there, and in the interim we have managed to get troops killed all over the globe in the “War on Terror”. We still have around 15,000 troops in Afghanistan and the Taliban is showing no signs of going away. To compound matters, the neocon forces in Washington are doing their best to get us involved in completely unrelated conflicts with Syria (and by extension possibly Russia, their ultimate prize) and Iran.

Let’s look at what we have lost. American casualties in Iraq number around 4500. In Afghanistan the number is around 2400. 6900 dead in those two wars, or more than twice as many Americans as were killed on 9/11.

That doesn’t take into account the tens of thousands of U.S. troops that were wounded, including hundreds and hundreds of amputees, and the tens or hundreds of thousands more that have suffered traumatic brain injuries and that still suffer the effects of PTSD. And of course there are those civilians killed in the insurgency in Iraq and by attacks by the Taliban in Afghanistan that easily top over 100,000 civilians dying.

The Middle East is a mess. Iraq, Yemen, Libya, Syria. The “War on Terror” has compounded the chaos in the Middle East and Africa.

Our civil liberties have been badly eroded. Domestic surveillance, the hypocritically named “Patriot Act”, the daily indignities suffered by citizens at airports, all have helped to make us less free than we were when the towers came down.

The financial cost will have repercussions for generations and might help ensure the end of the United States. On September 10, 2001 the total U.S. national debt, according to Treasury Direct, was $5,773,172,068,291.89. As of Friday, September 7, 2018 the total debt was $21,456,483,108,262.84. Granted that is in raw dollars that are not inflation or GDP adjusted but the simple math is that the debt now, after 17 years of war, is rapidly approaching quadruple what it was before the attacks. This chart from Marketwatch gives you a visual sense of what has happened. 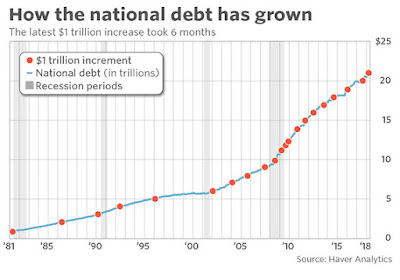 That is a pretty ominous chart and one major factor in that debt increase are the deficit spending budgets that have been common since the attacks. Here is a custom chart showing this annual deficit spending, including projected deficits. 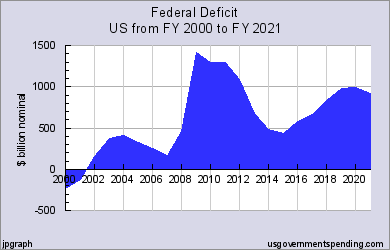 Of course there is a huge spike during the Obama years, especially ’09 through ’12, where President Obama spent like the proverbial drunken sailor but President Trump isn’t doing much better. The military accounts for a significant chunk of this deficit spending. Our military spending has skyrocketed since September 11, going from around $300 billion to being regularly in excess of $600 or even $700 billion, and that is just the spending directly attributed to the Department of Defense.

In short, the response to the attacks on September 11th have left the United States with twice as many dead as actually died that day, tens of thousands wounded and maimed, tens or hundreds of thousands with permanent brain and mental trauma. We are far less free than we were. We are far deeper in debt, dangerously so. After the short lived patriotic unity after the attacks, and thanks to both the divisiveness of Obama and the relentless attacks on Trump by the media (and his responses if I am being fair), we are farther away from the ideal of a “United States” than at any point since the Civil War.

If you accept the general narrative of 9/11, a ragtag group of 19 terrorists managed to pull off the “greatest” terror attack in history but then the government of the United States has managed to respond to these attacks by being wrong in just about everything we have done since. I can’t imagine that those 19 terrorists could ever have, in their wildest dreams, imagined how deeply the response to those attacks has wounded America and undermined our most cherished beliefs.

It is time to close this chapter in American history, a dark and destructive 17 years of war and eroded liberty. It is time to pull out of Afghanistan completely and to withdraw our various operations around the Middle East, Africa and Asia. It is time to put the liberties of American citizens back at the forefront and to focus on fixing America instead of playing terrorist whack-a-mole around the globe.