Why The Sarah Jeong Hire By The New York Times Matters

Just a few days ago I wrote about the New York Times declaring the white population of New Hampshire to be too numerous and the measures that could be taken to "fix" New Hampshire's "whiteness problem": Being Too White Is A Problem That Must Be Solved: The New York Times And The Quest To Diversify New Hampshire. Apparently that was just the beginning because the NYT then turned around and hired someone named Sarah Jeong to their editorial board. You can be excused for not knowing who she was prior to this week, she used to write for Vox which is far-left propaganda. But now she works at what once was considered a prestigious organization. Then some people started looking at her old (2014 being considered "old" in this era) tweets and they used some....colorful language which expressed her disdain for white people. Here is a sampling of what she said in her tweets (all are still active at this time). **Language warning** 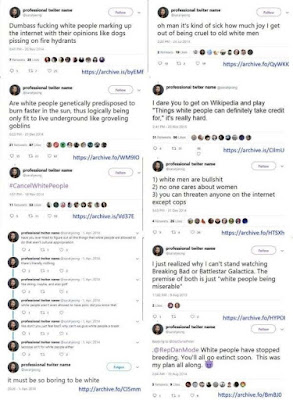 Very classy. Not only are these tweets racist and reflective of someone who hates white people as a group simply for being white, they are incredibly lame. They are not edgy or clever, they are just kind of dumb, the sort of stuff I would expect from a high school student, not someone who is invited to join the New York Times editorial board.

Of course she immediately claims victimhood and explains it wasn't her fault because she was just counter-trolling white people who were mean to her online. She even wrote a book about people being mean to her online. I have no doubt people have been rude to her online. She is a frequent tweeter and that draws trolls. I have been called all sorts of names on social media, just this week a random British guy who took umbrage at a comment I made on Facebook messaged me and called me a "pedo faggot". I didn't cry about, I just blocked him and moved on with my life. But not Ms. Jeong, she immediately and hilariously adopted the damsel in distress model and just as hillarious are the far left men online, most who would claim to be "male feminists", immediately white knighting her on social media. It is all so terribly predictable.

One doesn't counter-troll racists by engaging in reverse racism. Calling white people "grovelling goblins", tweeting the hashtag "#CancelWhitepeople", which has a pretty ominous undertone, calling whites without qualifier "dumbass fucking white people" and comparing them expressing an opinion online to “dogs pissing on fire hydrants.” comes from a deeply hateful mind. She is clearly a racist and that is her prerogative in a free society. But when she is hired as a member of the editorial board of a newspaper that piously and pompously declares it contains "All the News That's Fit to Print", it raises the obvious question of hypocrisy.

If Fox News hired Richard Spencer as a commenter, do you think the media talking heads and Twitter blue checkmarks would defend the hiring? Of course not. The media would go into overdrive saying "See, see! Fox News is full of racists!". It is just an enormous double-standard and just reinforces that a) The New York Times is leftist propaganda dressed up as news and b) there is a serious issue with anti-white racial animus at the NYT. The excuse that "I was only being racist because other people were being racist to me" wouldn't fly coming from any white person. Imagine someone like David Duke using that as an excuse. For the New York Times, Ms. Jeong's crass and infantile anti-white racism is a feature, not a bug.

But it is not just the overt anti-white racism that is troubling. It is also the sheer ingratitude on display. Ms. Jeong is a native of South Korea. South Korea was protected from their brethren to the North and the Chinese by the blood of Americans to the tune of nearly 34,000 deaths. Certainly the South Korean people suffered mightily as well but it wasn't our country we were defending from suffering the same fate as the North Korean people have suffered for over 60 years. Meanwhile more than a half century after the end of the Korean War, the U.S. still stations 28,000 troops in South Korea to serve as a deterrent to North Korean aggression, along with tens of thousands of additional forces in Japan. The bill for the U.S. to maintain these forces runs into the billions, even after a significant cost of the deployed forces is offset by South Korea and Japan. If Ms. Jeong were to try to be so "edgy" under the North Korean regime, she would have died a long time ago of execution or starvation in a camp, unless she became a good little Communist shill and perhaps informer which doesn't seem out of the question. In other words, she has the ability to tweet her juvenile ramblings thanks to a nation that is majority white sending an overwhelmingly white army to protect her grandparents from Communist invaders.

So here is someone who intentionally leaves a nation that is one of the most ethnically homogeneous in the world, 99% Korean, for a nation that is majority white founded by white men, goes to schools founded by white men and gets a great job at a newspaper founded by white men and then crabs about white men. She does her crabbing on Twitter, a social media platform created by four white guys, a social media platform that runs on the internet, itself mostly an invention of white men. I can see why someone who has benefited enormously from the inventiveness, hard work, blood, sweat and intellect of white men would be so sore at them. 😒

Once again we see an unintended benefit of the Trump Presidency: the media revealing itself for who and what it is. They no longer even try to hide their leftists political agenda and their racialist animus toward whites, at least white people who are not properly tame and obsequious whites. Sure she is just another generic liberal on the New York Times editorial board spewing propaganda for the leftist readership of the NYT but the fact that her overt racism was known to the NYT and they still hired her is a shot across the bow. The real question remains: when will we start to pay attention?
Posted by Arthur Sido at 12:01 PM