For more than a month, people in Iowa have been searching for a young University of Iowa student, Mollie Tibbetts. She disappeared while jogging on July 18th and her picture started to spring up all over the news. Like every case where a young woman disappears, you looked at her pictures and were filled with dread because these cases almost never turn out well. 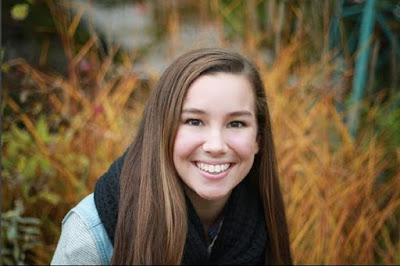 Neither did this one. The body of Mollie Tibbetts was found yesterday in a cornfield. The police were apparently led to her body by an illegal alien from Mexico, Cristhian Bathena Rivera. According to police, Rivera was somehow stalking or harassing Mollie while she was jogging. Allegedly she was frightened enough or at least irritated enough to threaten to call the police and that threat prompted Rivera to kill her, put her in the trunk of his car, drive out to a field, dump her and cover her with corn stalks. A corn field surrounds my house and right now there could be a dozen bodies within a stone throw of where I am sitting and I wouldn't know it until harvest. A cornfield is an obvious hiding place for someone in a panic in a state that is stereotypically covered with corn. I can only hope that what we are being told is all there is to the story and that she died mercifully quickly.

I want to be sensitive to the rawness of this case but this is the time to talk about it, now while it is fresh instead of waiting until Mollie is forgotten. The main webpage and news section of the University of Iowa makes no mention that one of their students was founded brutally murdered yesterday. I am afraid that the circumstances of her death while mean that she will rapidly disappear from most news sources. Fox has her story and the fact that her killer was an illegal alien at the top of the page. CNN.com has a small story at the top nestled in-between stories about Trump. MSNBC's webpage doesn't even mention her and last night a contributor to one of their inane talk shows was seemingly disgusted that the news was focused on some "girl in Iowa". In a week she will be forgotten except by those who knew and loved her, and for them the loss will never go away.

The obvious point here is that this never should have happened. She should have gone jogging that night and come home like always. Mr. Rivera should have been in Mexico, not Iowa. He worked at a local farm and they quickly claimed that he passed E-Verify, meaning that he was probably using the information of someone else. I hope they find that person and prosecute them if they were aware he was using their information. Of course not all or even most illegal aliens are murdering young women out jogging but all of them are breaking the law, as are those who employ them. Sure we have lots of our own home grown criminals, the men shooting each other by the hundreds every weekend in Chicago and other cities are mostly U.S. citizens. But we don't need more criminals in our country and say what you will about illegal aliens, they have all already shown a willingness to break the law. We have enough trouble without importing 15 million or more additional criminals. Somewhere between 25-35% of the Federal prison population are illegal aliens. If we had a border wall, stricter immigration enforcement, etc, it wouldn't have ensured that Mollie Tibbetts came home on July 18th after her run, but it might have. This is just supposition based on the affidavit which I read this morning it would appear that Mr. Rivera was scared of having the police show up and being deported so in a panic he killed Mollie.

That isn't actually what prompted me to write about her. Lots of other outlets are writing about the murder of a beautiful young woman by an illegal alien and what that says about our system. What I found fascinating was something Mollie tweeted last December. 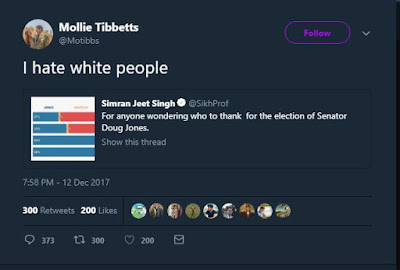 You can't see it in her tweet but the full tweet shows that whites, male and female, voted pretty overwhelmingly in the Alabama special election for the Senate where Democrat Doug Jones defeated Republican Roy Moore after an all out smear campaign against Moore. Predictably 20 year old college student Mollie wasn't happy that whites voted for the Republican Moore, in a deep red state like Alabama. Other people posted this tweet and it got me thinking about what it means.

Did Mollie really hate "white people"? I doubt it. Her dad who searched high and low for her desperately for weeks is white. Her boyfriend of several years is white. She probably would have graduated from the University of Iowa where she chose to attend school, which is around 82% white, a university full of students like her that were also from Iowa (88% white). She lives in Brooklyn, Iowa which is 95% white. She went to Brooklyn-Guernsey-Malcom school which looks to be overwhelmingly white and based on her pictures on social media her friends were mostly white. Her Instagram page is entirely her with other white people, with the exception of one guy in a group photo who looks to be mixed race three years ago. She obviously doesn't "hate white people". So why did she say that she did? We can't ask her, apparently thanks to an illegal alien. What would prompt a young Midwestern white woman, living in a world surrounded by other white people, a pretty young woman from Iowa of all places, with a heart-melting smile who was the poster girl for being white, to take a break from posting fluff about boys and her weight and pictures of her friends to make that comment?

What is always instructive about whites who post apparently self-loathing complaints about white people is that they tend to be like Mollie, surrounded by other white people. Clearly they don't hate those white people. No, what they hate is a caricature of "other white people". There is historical precedent for this. In the days of the Third Reich, a rag of a newspaper called Der Stürmer was published and it contained lurid stories of Jews drinking the blood of Christian children in rituals or Jews sexually assaulting white women. Many Germans had friends and neighbors that were Jewish that they liked just fine, but "those other Jews" were the problem. Der Stürmer often ran cartoons of Jews that portrayed them as demons, like this cover. 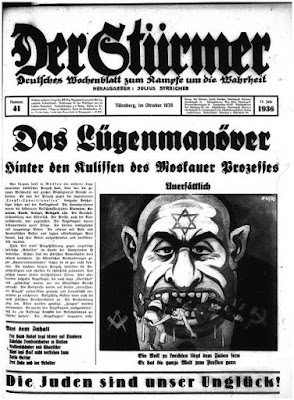 Jews were often portrayed with exaggerated noses and pointed ears, little changes to make them look evil. The point is that the Jewish enemy that Germans came to loathe was an invention of the media, not a reflection of actual Jews.

The same is the case with the self-loathing of white people. The white people they hate don't really exist in significant numbers, but are instead an invention of the media and entertainment world. Look at the coverage of the recent "Unite the Right" rally in D.C. where a couple dozen schmucks made speeches and hundreds of lunatics and just as many media outlets showed up to exaggerate the threat they posed. But you would think that the "Alt-Right" is everywhere, poised to take over the government (or already has for those nutjobs that think Trump and pretty much all Republicans are "white supremacists"). The New York Times hires for their editorial board an Asian woman who has wildly benefited from institutions created by white people in spite of (or perhaps because of?) her juvenile tweets about how awful white people are. You don't have to expend much effort to find news story after news story from major outlets bemoaning whiteness, like the NYT complaining that New Hampshire is too white. It has even spawned a meme, "Darn white people and their (spins the wheel, picks a card).... <insert something mundane here>".

The Cultural Marxists of the radical Left have tried for the better part of a century to convince the white population of America to move faster down the road to socialism but as the influence of labor unions has collapsed and as white voting patterns trend stronger each year toward the Republican party, the Left has declared white people a lost cause and the goal now is wholesale population replacement, getting rid of whites via low birth rates thanks to "careers", abortion and birth control and replacing them with non-whites voters who are more open to socialism. An important part of this strategy is to keep as many white people un-self-aware as possible and racial self-loathing is a huge part of that. A critical point of Douglas Murray's book The Strange Death of Europe is that Europe as a whole is more or less welcoming mass migration because they no longer see in their own culture anything worth preserving. It is a mass ritualistic cultural suicide in slow motion. The same thing is happening in America as monuments are torn down, history is rewritten and even our language is being perverted for political reasons.

Mollie Tibbetts was a 20 year kid in college at a state school in the middle of Iowa. Her worldview was clearly deeply influenced by the college culture, entertainment world and social media. Like many young people her age she seemed a bit naive and even innocent in a way. She seems to have absorbed a lot of the progressive pabulum that inundated her world. That is not surprising, nor is it surprising that a young woman who was the epitome of a Midwestern white girl would tweet that she hates white people, even when that clearly was not the case. It is said that a young person that isn't a liberal has no heart and an older person that isn't a conservative has no brain. Sadly thanks to the actions of a murderer who was in this country illegally, Mollie Tibbetts will never get the chance to mature and grow up to form her own opinions.
Posted by Arthur Sido at 10:56 AM