A Refresher On The First Amendment

CNN's Jim Acosta, a "journalist" that regularly exhibits the sort of sober-minded restraint normally reserved for a middle school girl, was incredibly upset last night because he was treated in a less than obsequious manner at a Trump rally. As middle school girls everywhere are wont to do, Jim launched into a borderline tearful tirade on Twitter: 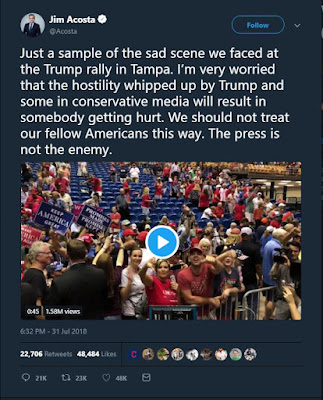 It is hard to type out a tweet through your tears of anguish. On the other hand, take a scroll through Jim Acosta's twitter feed. It is nothing but anti-Trump crap he tweets or retweets. He is clearly and openly hostile toward Trump and partisan but he sees himself as some sort of noble journalistic crusader. At least the media on the right doesn't pretend to be neutral. Jim, you can't openly take a partisan side and then whine about not being the enemy. That doesn't stop him from issuing dire warnings about political violence. The problem is that we already have an epidemic of political violence, it just isn't coming from Trump supporters.

As anyone who is paying any attention already knows, essentially all of the political violence during and after the 2016 election was directed from the Left toward Trump supporters and Republicans in general. Remember Steve Scalise and other Republicans getting shot up during a baseball practice by a Bernie Sanders fan? He almost died. Remember the people getting punched and having eggs thrown at them for daring to actually exercise the First Amendment right of peaceable assembly by attending Trump rallies? A lawsuit against the city of San Jose is being allowed to proceed after two men were attacked and seriously injured by a violent mob for trying to attend a Trump rally. There are over 500 documented attacks on Trump supporters, not to mention the many, many people who didn't show up to rallies because they were intimidated by these violent mobs. Does Acosta care about that? How about when the Huffington Post ran an opinion piece that justified and tacitly encouraged people to respond to Trump supporters with violence: Sorry Liberals, A Violent Response To Trump Is As Logical As Any. When far left speakers want to speak on campus they get an enthusiastic audience. When even someone as mild mannered as Charles Murray is invited to speak on campus he is met with angry crowds trying to shut him down, an event where a professor at Middlebury was injured. Other conservative speakers were greeted with things being set on fire and windows smashed. Many were forced to cancel. If Jim Acosta is worried about political violence, he is calling out the wrong people.

But as silly and transparently biased as that statement is, the screeching about the First Amendment on Twitter was priceless. Larry Sabato, who is "Director, UVA Center for Politics", tweeted this out... 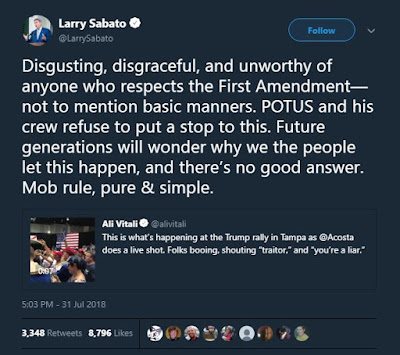 As I tweeted back at Larry: Where in the First Amendment does it require anyone to be polite to the media? I can absolutely respect the First Amendment (all of it) and jeer any journalist I like. As a matter of fact I have the right to jeer the "media", just as people have the right to say all sorts of stuff about Trump. It is part of a free society but oh no, you can't say anything bad about the media (at least the liberal media, you can say whatever you like about conservative media). The "media" is more prickly about their privilege and lofty perch in society than almost any other group.

As a reminder, because I don't think enough people actually know what the First Amendment actually says, here is the text:

Congress shall make no law respecting an establishment of religion, or prohibiting the free exercise thereof; or abridging the freedom of speech, or of the press; or the right of the people peaceably to assemble, and to petition the government for a redress of grievances.

Allow me to carve out the part pertinent to Jim Acosta's quivering lip meltdown:

Congress shall make no law...abridging the freedom of speech, or of the press;

The key words here are "Congress shall make no law". Certainly we have interpreted that to mean that the government in general isn't allowed to interfere with the freedom of the press, although it has on many, many occasions. So if Trump were to order the FBI to shut down CNN, that would be a violation of the First Amendment. Question: if CNN stopped broadcasting, how long would it take anyone outside of an airport realize it? But the First Amendment in no way requires Trump to field questions from Jim Acosta at a press conference (that Trump is not required to hold). Nor does it prevent Trump from mocking Acosta and CNN at will. It absolutely doesn't prevent private citizens from jeering CNN and making fun of poor Jim Acosta. What Trump is "guilty" of is not playing by the Washington rules, which was kind of the point of electing him in the first place.

People expressing themselves at a Trump rally or Trump calling CNN fake news is not an assault on the First Amendment. It is actually the very essence of the First Amendment. Free expression is not limited to people with degrees in journalism employed by globalist media conglomerates. That is not really what this is even about. What is really going on here is something a lot simpler and far older than the First Amendment: pride. I have said for a long time that the worst thing you can do to a proud person is to make fun of them. You could hit Jim Acosta in the face with a 2x4 (and I am not advocating that) and while he certainly would cry, it wouldn't hurt him nearly as badly as pricking his pride. Just about everyone in the mainstream legacy media, from Jim Acosta and the New York Times down to the staff on mid-sized city rags, has bought into the mythology of journalism. They all think they are the Second Coming of Woodward and Bernstein. They imagine an aura of nobility surrounds them, that they are all gritty fact-finders bringing the light of Truth™ to a darkened world. Most of all they see themselves as a quasi-clerical class and the only thing missing are the vestments. What the election of Trump has done is pull back the curtain and exposed the media for what they are: just regular people with their own prejudices and biases.

So Jim Acosta, spare me the histrionics, get off your fainting couch and put down the smelling salts. Our republic requires a free press but it also requires freedom of expression and that means that people can call you fake news, especially when you go out of your way to reinforce that. No one is suppressing your functioning as a journalist. You aren't being repressed. Grow up.