The Gratitude Is Heartwarming

As part of the national celebration of Independence Day on July 4th, we are typically presented with images of newly naturalized citizens from around the world being sworn in as citizens of the United States.The images are intended to reinforce the correct way to enter the United States and to show how happy and excited the new citizens are.

This Independence Day we were treated to a different image, this time of a woman who decided to take it upon herself to clamber up the base of the Statue of Liberty to call for the abolishment of I.C.E. 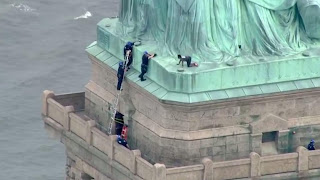 Since no one was quite sure what this crackpot was up to, the island was evacuated and police had to come and risk injury to extract her. Around 4,000 people who were trying to enjoy the celebration of our nation's founding were frightened and inconvenienced so this woman could engage in a publicity stunt. So who was this person? 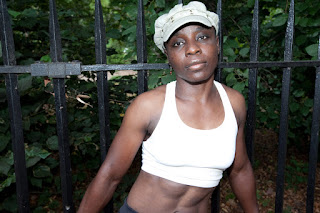 Her name is Therese Patricia Okoumou and she is a 44 year old Congolese woman who has apparently become a naturalized citizen and has lived here for 10 years. In her ten years she has had multiple encounters with law enforcement, including thousands of dollars in fines for plastering flyers advertising her services as a personal trainer all over Manhattan, not to mention being arrested last year for an incident where she was arrested for assaulting a cop, trespassing and obstruction of government business for protesting against the New York State Department of Labor. Prior to that she filed a grievance against a former employer for "demeaning" her. In general she has seemingly made a huge nuisance of herself in the ten years she has been in the U.S. but hey what would we do without semi-professional "activists"/Congolese personal trainers in Manhattan? Diversity is our greatest strength! Nation of immigrants! Melting pot!

During her court hearing she was reportedly blowing kisses to her supporters and raising her fist, I assume in a form of the black power salute, while wearing a t-shirt that reads "White Supremacy Is Terrorism". Setting aside the fact that there are essentially no actual white supremacists around these days and I am guessing she couldn't define the term if pressed, she clearly thinks her law-breaking is cute and some sort of noble, grand gesture. She could face several years in prison but since this is Manhattan she will no doubt get off with a slap on the wrist in spite of her prior legal troubles.

Since she apparently has little love or respect for America and thinks we are all part of some white supremacist plot to cage children or something, one wonders why she came here and further why she doesn't return home to the Congo. After all, I am sure they need personal trainers in the Congo and it looks like there are very few white people in her native land. It sounds like she would be better off there.

Ironically the day before her stunt, a story ran in the U.K. Daily Mail. Here is the headline: 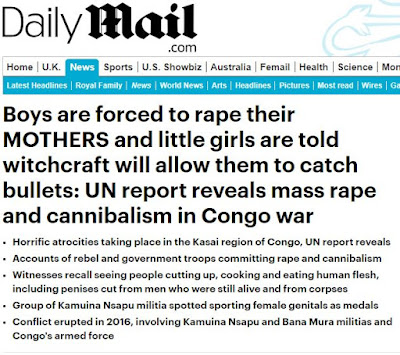 So a little bit of mass rape, mutilation, dismemberment, beheadings, cannibalism, witchcraft. You can read the whole article at the link above this picture but it is incredibly unpleasant. According to wikipedia:

In 2016, DR Congo's level of human development was ranked 176th out of 187 countries by the Human Development Index. As of 2018, around 600,000 Congolese have fled to neighbouring countries from conflicts in the centre and east of the DRC. Two million children risk starvation, and the fighting has displaced 4.5 million people.

So a Congolese woman flees a nation full of other Congolese people and leaves behind an incredibly violent and backward nation where murder and rape is common. She comes to the United States and even though we are under no obligation to do so, we welcome her in and she gets to become a citizen of the U.S.. She then spends the next ten years protesting against the nation that took her in and gave her shelter, breaking the law on at least three occasions that we know of during that time. Instead of being grateful to the nation that gave her shelter and provided her with the opportunity to be a personal trainer for Manhattan's elites, she instead spends her time telling us what we are doing wrong. I would imagine that most people saw right through her publicity stunt and are less than impressed.

Ingratitude is one of the ugliest expressions a human can have. Ms. Okoumou is a naturalized citizen and she has the same right of free speech and protest that any other citizen of this country has, a right I assume she didn't have in the Congo. She doesn't have the right to break the law repeatedly and think she is being clever or cute in doing so. I hope the judge throws the book at her, even though our prisons are already brimming with non-native lawbreakers and I doubt that even spending a year in prison would do anything but reinforce her martyr complex. I just thought it was an interesting contrast to examine the nation she fled from and the nation that welcomed her in.
Posted by Arthur Sido at 8:02 AM