Progressives And Their Pot Of Everlasting Free Money

To piggyback on my prior post: The Futility Of Arguing With "Progressives"...

Socialist wunderkind Alexandria Ocasio-Cortez hasn't even been elected yet but she is already getting more airtime than many more established Democrats. The media just can't get enough of her. She is young, she is Hispanic, she has a somewhat shaky but still appealing origin story, she is an open socialist and she is the rare non-homely feminist. Therefore she is one of the hottest properties for the Left, often touted as the future of the Democrats. The fact that she is dumb as a box of rocks is only a minor inconvenience. She was recently on the Daily Show with Trevor Noah and it was hands down one of the most cringey things I have ever watched.

“The Daily Show” host @Trevornoah asked Socialist congressional candidate Alexandria Ocasio-Cortez (@Ocasio2018) how she plans to pay for her agenda.

It really is hard to watch. pic.twitter.com/OGiPAArlce
— The Daily Caller (@DailyCaller) July 27, 2018


I agree that it is hard to watch. Even though I despise everything she stands for, I just don't like seeing people make fools of themselves. It is always instructive to watch a politician that has gone off-script. You can see her really struggling which suggests to me that she is either being evasive about what she really thinks or hasn't given it much thought at all. Probably a combination of the two.

There have been other examples of people "on the street" being asked how to pay for all of the "free" stuff she is proposing. The answers are about what you would expect.


The answer to who is going to pay is always "someone else". I want something and I want someone else to pay for it. It is not just the knucklehead on the street that believes this. Check out these tweets from Chris Hayes of The Nation and MSNBC. 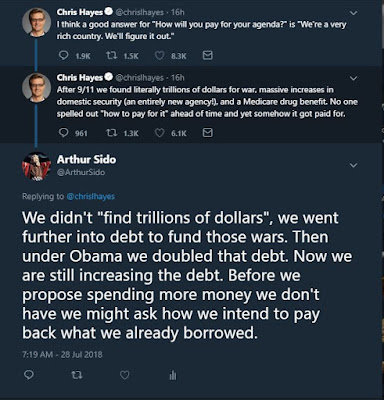 That is the progressive mindset on display. Chris Hayes has 1.68 million twitter followers. He seems to think we "found" the money to pay for Iraq and Afghanistan in the cushions of couches in the White House. There is this firmly held article of faith that seems to believe that there is an unlimited bucket of money in Washington and the only reason we don't give away more of that money is because Republicans hate poor people. No mention of the national debt that we have incurred to pay for these wars, for social spending, for Medicare drug benefits. No mention of the looming insolvency of Social Security and Medicare. No mention of the incredible amount we spend already just to pay the interest on the debt (more than a quarter of a trillion dollars and that is an old figure). Check out this chart from Freedomworks: 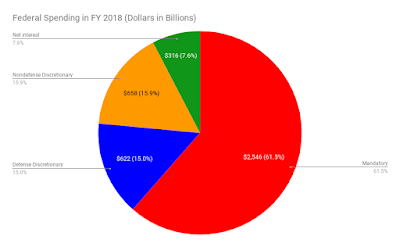 As the article points out, the level of mandatory spending is going to only increase. In this pie chart interest on the debt is "only" 7.6% of the budget (and budget which is paying hundreds in billions on interest on the national debt while at the same time borrowing more money to add to the national debt, which in turn increases the amount of interest...). By 2028, if not sooner, almost 12% of the budget will go to interest on the debt. That means that one out of every ten dollars we spend will go to service the debt on spending from 5, 10 or even 20 years earlier. That is also just servicing the debt, it does nothing to pay the debt down. It is sort of like making minimum payments on credit cards which basically just pay the monthly accrued interest. Except that in this case the credit card has a balance of $21 trillion and the party that incurred the debt has over 6,500 nuclear warheads. What could go wrong?

Progressives operate on an economic version of what Christians call "radical grace". Whereas Christians might say "You brought nothing to your own salvation but the sin that needed forgiveness", progressives think that they bring nothing to government spending but the policy that needs funding. If you just have faith, it will be funded. Setting aside the question of whether these are actually policies that will work as intended and help those they are supposed to help, the question of "how" to pay for them never comes up. Tax the rich that don't pay their "fair share", even though they already pay the vast majority of income taxes. Raise the corporate tax that we just lowered, even though that just encourages companies to park money overseas. Institute a "carbon tax" that will increase energy costs for the people least able to afford a utility increase. Trying to convince them that we can't afford the spending we are already doing, much less wildly increasing it with stuff like Medicare for all, "free" college for everyone, a universal basic income so everyone gets a salary even if they don't work, is like trying to convince a religious zealot that there is no God. As I have said before, progressivism is a religion. I saw an example of that this morning on Facebook when someone claimed that all good and moral people of course voted for Hillary over Trump. Look at the language here.

All good and reasonable people. Therefore if you didn't vote for Hillary you are by definition neither a good nor reasonable person. It is fundamentalism that puts KJV-Only Primitive Baptists in Kentucky to shame.

"Conservatives" don't have clean hands here. With the discretionary spending pie shrinking and Republicans demanding that we spend more and more of that discretionary spending to "rebuild" our military that already outspends most of the rest of the world combined, it begs the question of where we could cut spending significantly enough to balance the budget. Not that anyone is even talking about that. At least some Republicans make noise about a growing economy increasing tax revenue but most of them are just content to kick the can down the road.

Progressivism is a fundamentalist religion and one of their dogmas is that we can and should spend and spend and then spend some more. How to pay for it isn't a concern. They don't know and they don't care. Pay attention to what is going on here. More young people are convinced that socialism is the way to go and the trajectory we are on is one of pretty imminent fiscal collapse. People like Bernie Sanders and  Alexandria Ocasio-Cortez are leading the vanguard. We are in a perilous time here, maybe as little as ten years away from a serious financial crisis. When the progressive demagogues can't spend money anymore, what do you think they will do, admit that they were wrong? Not hardly. They will do what zealots always do when thwarted: turn to violence.

Those days are fast approaching. Don't say you haven't been warned.
Posted by Arthur Sido at 2:49 PM