Senator Bernie Sanders, the "Democratic Socialist" who made more than a million dollars the last two years and owns three homes worth in excess of a million bucks, is on a Twitter tear complaining about the pay of CEOs. He focused a lot of his ire at the CEO of Wal-Mart, Doug McMillon. 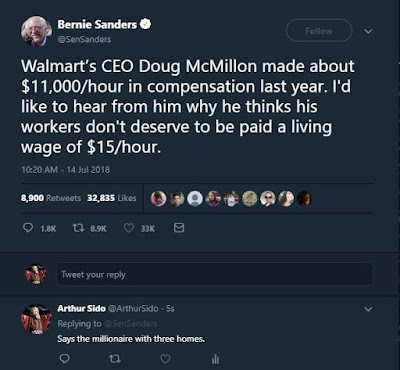 Of course his legion of equally economically ignorant fans chimed in. My favorite was this girl who has "three degrees" and still works in retail and is mad because someone should "give" her a wage that "allows" her to live. Period. 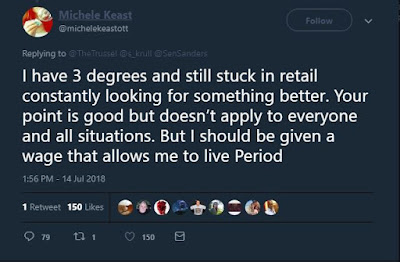 I assume she is already being allowed to live, since she is tweeting and all. But pointing that out would be rude. Also I wonder what her "3 degrees" are in? I am assuming not actuarial science or engineering.

What is ironic about the tweet from Sanders and the comments from his supporters is that the CEO he is chastising for making so much started out at Wal-Mart as a summer associate in 1984. He went back to Wal-Mart in 1990 as an Assistant Manager while pursuing his MBA and then took on a series of other jobs at Wal-Mart, including being the President of the Sam's Club division. In other words, for the last 28 years he has worked his tail off at Wal-Mart, climbing from an hourly summer worker to an Assistant Manager to CEO of the company. I am confident his rise was due to a combination of hard work, natural talent, persistence, loyalty, some luck and more hard work. The work habits of Wal-Mart executives is somewhat legendary. No one "gave" him the CEO job, he worked his way up and earned it. I have far more respect for that than I do for someone who sits around on Twitter demanding she be given a higher wage.

Anyway, let's give Senator Sanders some facts to work with because I am sure he is not just being a demagogue here feeding his cultish fans political red meat. This is a thought experiment, I am using some official numbers but estimating on things like average hourly pay and average hours worked per week. I am operating under the assumption that most of Wal-Mart's workforce, the vast majority of them, are hourly workers. Based on what I have seen in the store and my own stints working in retail management, that seems reasonable but again these are not hard and fast numbers, just food for thought.

Wal-Mart has around 2.3 million employees. Of those, 1.4 million are U.S. based. For this experiment we will ignore those workers, right now Commissar Sanders is focused on U.S. workers.

Just for the sake of argument let's assume the average pay is $11/hour. That isn't accurate but it reflects some of the published information from Wal-Mart and this is just an exercise.

Let's also assume that the average Wal-Mart employee, considering the mix of part-time versus ful-time, works an average of 30 hours per week. Again that is just for illustration purposes.

So in an average week, the 1.4 million employees of Wal-Mart work 42 million hours of labor. Think about that number for a second. That is just in one week.

So using my hypothetical here, if you arbitrarily raised the wages of Wal-Mart workers from an average of $11/hour to $15/hour, or an increase of $4/hour, and multiply that times the 2.1 billion hours they work it comes out to a net annual change of...

Wages are a major expense for retailers and one they have the most control over. An extra expense of $8.7 billion every year. Almost certainly you would attract some better workers and retain some workers that you otherwise might have lost if you only paid $11/hour but enough to make an 8 billion dollar difference? I seriously doubt it. Plus if "Democratic Socialists" like Senator Sanders and presumptive Congress-chick Alexandria Ocasio-Cortez have their way, everyone will make at least $15/hour and that means that once again working at Wal-Mart would be the lowest skill, entry level work and you could expect the productively to pretty quickly return to the current levels. Jobs that pay at the bottom of the pay scale invariably attract people with the fewest skills and experience.

Wal-Mart is a publicly traded company that exists to make a profit for their shareholders. As of right now, per Fidelity Investments, Wal-Mart has 2,950,844,000 shares outstanding. So Wal-Mart's earnings per share (reported as $2.99) is around $3 per share, somewhat below the industry average for retail but not terrible. Now if you hit their profit with $8.7 billion in additional costs, that would directly impact Wal-Mart's profit. The earnings per share is a little more complicated than this but if you reduce the profit from $9.8 billion to $1,064,000,000, all of a sudden the earnings per share of Wal-Mart drops to about $.36 per share. 36 cents a share earnings is awful, 90% lower than the industry average. Right now the annual dividend from Wal-Mart, the profit paid to the shareholders, is $2.08, or 2.37%. That is not bad for a fairly stable blue chip stock. Take away most of Wal-Marts profit and they probably don't pay a dividend at all. Suddenly Wal-Mart is not such a great stock to own. Share prices would likely plummet. As one of the most widely held stocks in the market that would impact a lot of mutual funds.

To summarize, for Wal-Mart, a for-profit company, to suddenly raise their pay to a minimum of $15/hour would devastate their profitability, making their stock a complete dog which impacts their ability to raise more capital, borrow money, etc.. On the other hand, if you reduced the CEO's pay to zero, it wouldn't have any impact at all. So the issue here really has nothing to do with how much the CEO is paid, it has to do with Wal-Mart's business model which has always been to sell a ton of stuff at a low price and make their money off of volume. It was that way under Sam Walton when it was just a single store and that is pretty much how it is now. That means controlling costs and one of the main costs they can control is labor. They hire low skill, minimal experience workers and pay them accordingly. They also promote 160,000 of their associates from entry level jobs to jobs with better pay every year.

Bernie Sanders can make his inane tweets to rile up his supporters because he is a Senator and has never had a real job where you have to show a profit. His proposal would essentially wipe out all of Wal-Mart's profits and that is not how you run a business in the real world. In the real world, actions have consequences. You don't just magically increase your labor costs by $8.7 billion and erase all of your profit to fulfill some socialist nonsense. Doug McMillon is paid quite handsomely to run a multinational business with over 11,000 stores and half a trillion dollars in revenue. Unlike Bernie Sanders he has proven himself over the years and has climbed to the highest position in the company he has loyalty worked for over the last 28 years. He deserves every penny the board of directors chooses to pay him. The average Wal-Mart worker shouldn't look at Doug with envy, they should see him for what he is: a titan of business who started out as a summer worker. He should inspire young Wal-Mart workers to seek greatness, not to wallow in self-pity. If he can work his way up from summer associate to CEO, so can they! Doug McMillon, unlike Bernie Sanders, is an American success story. We need a lot more Americans like him and a lot fewer like Senator Sanders.
Posted by Arthur Sido at 8:50 PM