Hate Crimes For Thee But Not For Me

There are two recent news stories that demonstrate just how ridiculous the "hate crime" laws are in this country.

A 91 year old Mexican man is out for a walk. He allegedly bumped into a small child that was walking with her mother. An eyewitness said he was trying to get past the woman and child on a sidewalk. The man is in his 90s and appears pretty frail. The mother, Laquisha Jones, a 30 year old black woman, confronts the man. At some point he appears to have tried to walk away because he was hit in the back of the head with a brick or piece of concrete. Some reports say 3-4 other black men joined in the assault but that is not confirmed by the L.A. sheriff. Regardless, the elderly man has been hospitalized and as you can see below was badly injured with a broken cheekbone. The witness reported Ms. Jones was shouting at the man the following according to the L.A. Times.

“She was yelling at him, ‘Go back to your country,’ or ‘Go back to Mexico,’” Borjas recalled. “It was racist.”

Ms. Jones has been charged with a slew of crimes including attempted murder and elder abuse. However, in spite of a witness saying Ms. Jones was pretty clearly using racially charged language, the police have a different spin on it.....

But authorities said that through their investigation, “detectives have discovered that this is not a hate-related incident.” 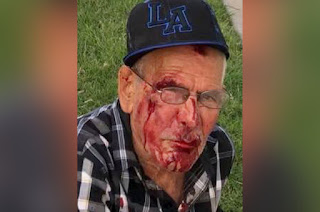 In Chicago a 62 year old local man, Timothy Trybus, confronted a woman in a park wearing a t-shirt with the Puerto Rican flag on it. He allegedly was screaming at her that she should not be wearing that shirt in the United States. Of course Puerto Rico is a United States territory and Puerto Ricans are natural born U.S. citizens although they are not represented in Congress so the United States is as much the country of the woman Mr. Trybus was yelling at as it is his. As far as I can tell from reports, at no time did Mr. Trybus come into contact with her. However he is being charged not only with misdemeanor assault and disorderly conduct but also two counts of a felony hate crime. This seems to be politically motivated. I pulled the story from the L.A. Times as well for consistency but the original story comes from the Chicago Tribune.

U.S. Rep. Luis Gutierrez said in an interview it’s clear to him the state’s attorney did “the right thing.”

Gutierrez, a national leader on immigration who has been vociferous in his criticism of President Trump, tied the comments on the video to the general political atmosphere in the country.

“There should be consequences. People have to learn there are consequences, especially in the era of Trump,” Gutierrez said. “I really do believe there are people who say to themselves, ‘If Trump can do it, I can do it. Why can’t I go out there and say the things the president says?’ ”

He said this is a moment in time when local authorities must step in on racial and other issues, as he said the more conservative federal Justice Department is less interested in these issues than past administrations.

“I think this is the way until we retrieve rational governance at the federal level,” Gutierrez said.

Ah, I see. Luis Gutierrez is sort of a Hispanic version of Al Sharpton, any time there is some sort of grievance that impacts a member of the Hispanic community you can be sure he will be around to roil the waters. He wants this man punished because of there should be "consequences, especially in the era of Trump.". So now we are basing felony charges on who the President is? Somehow yelling at a woman becomes a hate crime because of Trump?

The incident occurred on June 14th, but it was almost a month later when Cook County added the hate crime charges after what appears to be enormous pressure from Gutierrez and Cook County Commissioner Jesus “Chuy” Garcia, among others no doubt including the governor of Puerto Rico. If you look at the comments from Gutierrez, they are entirely directed at President Trump and not the crime itself. This certainly gives the appearance that these charges are politically motivated to advance the narrative that President Trump is somehow encouraging "hate crimes". Oddly I didn't see any mention of Representative Gutierrez intervening in the first case. How strange.

It is important to remember in this case that there was apparently no physical contact (I didn't watch the video), just a guy who seems a little hazy on U.S. geography shouting at a woman. Frightening to be sure but people get frightened all the time. People don't get hit in the head with a brick on a regular basis.

Not a hate crime.

A white man being a jerk and frightening a woman while screaming racially charged language?

This doesn't even take into account things like a Hispanic man, Kino Jimenez, screaming slurs at a white teenager, stealing his hat and throwing a drink on him. Mr. Jimenez was arrested for theft and has subsequently lost his job and been kicked out of the Texas Green Party. But no hate crimes charges even though he stole a hat and threw a drink on someone as opposed to just yelling. As a side note, even though the attack on the white teen and theft of his hat was all over most of the news, as of a few moments ago a search at CNN for "Kino Jimenez" yields no results. One can imagine that if a white guy stole an Obama hat from a black teen and threw a drink on him, CNN would find a way to squeeze in a story about it.

So what is my point? Isn't this just sour grapes from a privileged class or something?

My point is this. The category of criminal offense called "hate crimes" has all the appearances of being a political tool to game the legal system. It allows what is essentially virtue signaling that is backed up by the legal system. If I commit a crime, I should be charged for that crime. Trying to guess my motivation and punish me differently makes an already politicizes judicial system even worse. In these cases a man is being charged with two felonies for shouting at someone because it was determined that he was motivated by hate. Maybe he was. Maybe he was drunk or is mentally unstable or is just an idiot. But now he is looking at felonies. Should he be convicted of hate crimes, you can be sure this will lead to a lengthy appeal that could go all the way to the Supreme Court. I hope that it does because this is a slippery slope. If it is determined that shouting and being disorderly constitutes a felony hate crime, what is to stop that from being used for all sorts of non-violent incidents. If a street preacher is preaching in a public place that homosexuality is a sin, could he be charged with a hate crime? You could in many other Western nations where that sort of preaching gets you tossed in the can.

Hate crime laws further muddy the water of the legal system. As is clearly the case in the second event, Mr. Trybus is being charged with a hate crime for political reasons. Pressure was put on the D.A. to charge him with felony hate crimes by a United States Congressman who wanted to score points against President Trump. Now instead of a couple of misdemeanors this guy, who again seems like a jerk, is facing felony charges. He should have been charged with disorderly conduct and assuming it is his first offense, gotten a plea deal for some community service and maybe a short stint on probation. That seems reasonable for his offense. But two felony hate crimes? Does that really make sense here? Especially in light of other incidents like Ms. Jones actually assaulting someone and being charged with attempted murder, yelling something similar but not being charged with a hate crime.

If our legal system turns into a place where the D.A. or State Attorney can pick sides for political reasons and turn a minor offense into a felony, is that really where we want to go? That doesn't serve racial justice, that aggravates racial strife. It certainly starts to appear that hate crime laws are only applied in one direction except in severe cases like the four black teens torturing on camera a disabled white kid. It doesn't help matters in this country when it seems like the law is enforced differently depending on the race of the victim and the accused. We have enough trouble in the legal system as it is, let's just charge people with the actual crime they committed and leave the process of divining their motivations out of it.
Posted by Arthur Sido at 3:42 PM