Bill Kristol And His Forked Tongue

I deeply dislike Bill Kristol. You could even say I despise him. I find him smug and smarmy but I also find him as dishonest as can be. He and all of his ilk are still so incensed that Republicans would dare to pick and elect a candidate that didn't meet their approval that he and all of his NeverTrump cronies have spent the last year and a half endlessly whining and kvetching about every single thing Trump does. I am not talking about sincere and thoughtful opposition to something Trump does or says. I am talking about the endless snickering, petty insults and general unpleasantness the neocon NeverTrumpers exhibit as a matter of reflex.

A few days ago was a prime example. Kristol was responding to someone that suggested that birthright citizenship might be a bad idea. The idea of birthright citizenship goes back to the 14th Amendment which states in part "All persons born or naturalized in the United States, and subject to the jurisdiction thereof, are citizens of the United States and of the State wherein they reside. No State shall make or enforce any law which shall abridge the privileges or immunities of citizens of the United States;" The reason for the Amendment was to prevent the disenfranchisement of blacks. It wasn't intended to say that if you sneak into America and deliver a baby, that the baby should automatically become a U.S. citizen. That may be the we way it is interpreted but it certainly was not the intent. Bill Kristol took this essay as an opportunity to, as the broken record he is, to take shots at "Trump intellectuals". See below. 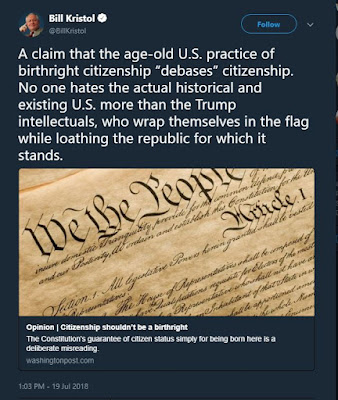 What I found ironic about this tweet is that this is the same Bill Kristol who not so long ago suggested that the solution to the problems besetting the white working class, you know, the existing and historical Americans, was to just get rid of them and replace them with immigrants:

“Look, to be totally honest, if things are so bad as you say with the white working class, don’t you want to get new Americans in?” asked Kristol.

This is the inside-the-Beltway, neocon mindset on display. People are not really all that important. They are just economic units to be exploited, tax cattle living in fly-over country that are supposed to keep their mouths shut, pay their taxes, subsidize people like Kristol and his irrelevant magazine and above all only vote for who their betters tell them to vote for. The United States is not a people, it is a concept, and the human beings that built this country and that live here now are interchangeable and irrelevant.

Clearly Kristol in his American Enterprise Institute speech calling for the replacement of existing white working class Americans could care less about the historic and existing U.S. population. The second they become a problem instead of a servile peasantry, out they go and in come the Mexicans. But when someone Kristol labels a "Trump intellectual" makes a case against birthright citizenship, here comes Bill Kristol shouting about the "actual historical and existing U.S.".

I don't know if Kristol really cares about birthright citizenship or not. I kind of doubt it because I don't think Kristol cares about much except himself. What I do know is that Kristol lies like other people breathe. To suddenly trumpet how much he cares about the "actual historical and existing U.S." when he just last year was calling for the wholesale replacement of the people who are the existing and historical U.S., the white working class, is at the least disingenuous. The entire point of his tweet, like pretty much everything on his timeline, is an attack on Trump. Kristol is as petty and petulant as Nellie Oleson. Instead of simply recognizing, as others like myself who didn't support or vote for Trump have, that he is the President and he is the standard bearer for the Republican party, Kristol is like a neocon version of Hillary Clinton, still trying to get a do-over of the entire 2016 election. Unless something very unexpected happens or if Trump decides to not run, he will be the nominee again in 2020. If people like Kristol are going to undermine Trump in the hopes of throwing the election to the Democrats, in essence burning down the Republican party so they can reform it in their own image and teach a lesson to those peasants in Michigan and Alabama to never step out of line again, then he needs to come up with a new political identity because a "conservative" that won't conserve anything is undeserving of the name.
Posted by Arthur Sido at 8:37 AM