I really can't recommend this article from National Review enough, The Truth about Separating Kids, and given the generally NeverTrump/Trump Derangement Syndrome (TDS) lunacy from NRO it takes a lot to get me to recommend an article there these days. Rich Lowry does a great job of looking at the actual facts. That is pretty rare when people afflicted by TDS resort to the "what about the children?!?!" mantra without asking questions like: what is the alternative? Government provided housing for tens of thousands of families being processed for asylum? Letting them loose into the country in the risible expectation that they will actually show up for their asylum hearing?  You really need to read the whole thing but one section stuck out for me regarding the claims of "asylum"

2) There’s a better way to claim asylum. Every indication is that the migrant flow to the United States is discretionary. It nearly dried up at the beginning of the Trump administration when migrants believed that they had no chance of getting into the United States. Now, it is going in earnest again because the message got out that, despite the rhetoric, the policy at the border hasn’t changed. This strongly suggests that the flow overwhelmingly consists of economic migrants who would prefer to live in the United States, rather than victims of persecution in their home country who have no option but to get out.

Even if a migrant does have a credible fear of persecution, there is a legitimate way to pursue that claim, and it does not involve entering the United States illegally. First, such people should make their asylum claim in the first country where they feel safe, i.e., Mexico or some other country they are traversing to get here. Second, if for some reason they are threatened everywhere but the United States, they should show up at a port of entry and make their claim there rather than crossing the border illegally.

From what I gather an awful lot of these asylum cases leading to family separation occur when a family is caught already illegally entering the country and the parents then claim asylum, starting the 20 day clock on how long children can be detained. If I wanted to claim asylum in Canada I would drive over the Ambassador Bridge between Detroit and Windsor, declare myself at the border and inform them I was seeking asylum. I would not sneak into Canada and hope to not get caught. You will notice that most of the asylum seekers seem to be people from countries south of Mexico. It isn't like it is a short trip from the southern Mexican border to the U.S. border. I mapped what looks like the shortest distance between a major city in the south of Mexico to a similar city near the U.S. border. This is what it looks like. 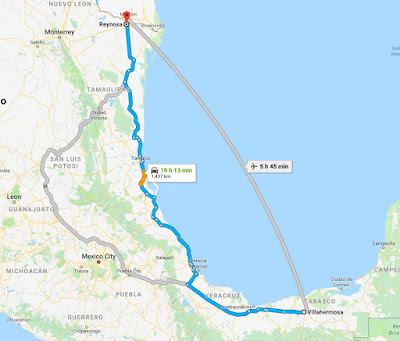 That is over 1,400 miles. Figure reasonably with only a couple of stops for gas that is twenty hours of hard driving. It is 200 miles further than driving from New York City to Omaha, Nebraska. You don't make that trip if you are just seeking asylum, you invest the time and money to make that trip because it pays off in the end.

The reason more people fleeing Honduras, El Salvador, etc. don't stop in Mexico to seek asylum is the same reason people coming from Africa don't seek asylum in safer northern Africa or the Middle East: America and Western Europe provide more in social benefits. These are by and large not true "refugees" so much as they are economic migrants. Those who are granted asylum in the U.S. or Western Europe are never going to leave. For example, people flipped out earlier this year when Trump announced that we are rescinding the Temporary Protected Status for almost 200,000 El Salvadorans. They received TPS after a devastating earthquake. That earthquake happened in 2001. Temporary Protected Status is supposed to be, as the name would indicate, temporary, like periods of 6-18 months. Meanwhile there are hundreds of thousands of El Salvadorans still here 17 years later. I assume the aftershocks from the 2001 earthquakes settled down some time ago. The way the process has always "worked" is that once you were granted asylum, you essentially became a permanent resident. That is clearly not the intent of the law nor is it what we are led to believe but that is what really happens.

The truth of the situation on the border is that it is very complicated. We want to be humane but we also have laws to uphold. It would be great if we could build nice housing for tens of thousands of immigrants while awaiting asylum hearings but a) that would be enormously expensive and b) it would be a magnet to draw even more "refugees" to the border. It would be great if we could let asylum seekers stay with family in the country and we could count on them to show up for their asylum hearings but we know that is not going to happen, not least because I am assuming an awful lot of them would have their asylum denied. It is clearly better to gamble with ICE picking you up than it is to show up at the border, declare your intent to seek asylum and then wait for a hearing. So it is not just a matter of screaming about children being "ripped away from their parents", you have to actual have the capacity to think through some of these questions.

My position is that the illegal immigrant/fake refugee problem is largely driven by demand. As long as there is a demand for low wage workers, those workers will flood across our borders. I am an advocate for a serious wall and greatly enhanced border security but I am also an advocate for stiff civil and even criminal penalties for Americans that hire illegals. Put a few meat packing plant HR managers in prison for 30 days for knowingly hiring illegals and pretty soon the demand, and the flow, will dry up. I would also rather see the U.S. financially help refugees to stay in their own regions. Make refugees ineligible for social welfare programs. Aid Mexico, African nations, etc. care for refugees where they share a common culture. Quit engaging in a foreign policy that creates more refugees!

It is critical to think seriously about these questions but it is also critical to understand that the raging debate over immigration is about far more than whether families should be separated or not. Right now there is an unholy alliance between business groups that want cheap labor to hold down wages and to buy consumer goods on the one hand and liberals who want mass immigration in a bid to replace the current unruly electorate with one that is easier to control and manipulate. Left in the middle are working class and middle class Americans that bear the brunt of lower wages, overseas competition, mounting debt and the social problems that come along with migrants (more on that in a soon to appear post). Instead of a real debate we have hysterics and crocodile tears.

The 2018 elections are going to be a referendum on Trump and in order for the GOP to retain the House and gain significant seats in the Senate, Trump and the GOP need to deliver on promises to middle and working class voters in places like Michigan and Ohio. Paul Ryan's massive amnesty proposal is a step in exactly the wrong direction. The narrative over separated families at the border is a smokescreen designed to inflame the liberal base and depress conservatives by emotional, rather than factual, appeals. But make no mistake, this country is on the precipice and we are just about out of time to start fixing it. If the GOP thinks we will keep showing up to vote for betrayals and empty promises, they are wrong.

Read Rich Lowry's piece linked at the top and please share it widely. It won't sway those most deeply infected by TDS but it just might help a few people to start to think about this issue based on what is really happening instead of basing their opinion on fake and old photos of children.
Posted by Arthur Sido at 8:33 PM