No Place For White Men In Today's Democratic Party

When I was a young pup, the Democrats were the party of the white working class. Union members voted Democrat as reliably as the sun rising in the east. My hometown of Toledo, Ohio was a major union town, thanks in large part to all of the UAW members who worked for Jeep in Toledo, and they dutifully sent Democrats to Congress year after year. The woman who represented Toledo in Congress when I was younger, Marcy Kaptur, is still there where she has served since 1983. Prior to Representative Kaptur a Republican served a single 2 year term but prior to that a Democrat served for 26 years. So 59 out of the last 61 years Toledo has been represented by a Democrat in Congress thanks almost entirely to the votes of the white working class.

Today? Today there is no place for white men in the Democratic Party. In order to hold any position of prominence in the future, you will need to be able to check off at least one box on the oppressed person checklist.

Case in point the recent primary loss of Joseph Crowley. Crowley is, at least for now, a U.S. Representative from New York's 14th Congressional District which includes parts of the Bronx and Queens. Crowley is the epitome of an old school New York Democrat. He is an Irish Roman Catholic, married with three children. In years past this guy would be a lifer in Congress. He was a highly ranked Democrat and was even thought to be a threat to Nancy Pelosi's top leadership spot. Not anymore. 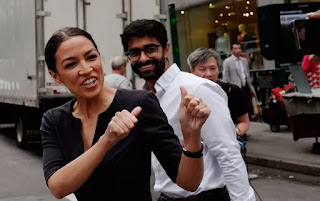 Nope, he lost to Alexandria Ocasio-Cortez. In fact he lost pretty big (57-42). What are her qualifications? Well she is very young, just 28 years old. When I was 28 I had graduated college, was married, had several kids and had worked real jobs for a number of years. I was not prepared to hold national office. Ms. Ocasio-Cortez has a degree from Boston University. She interned for Ted Kennedy and was an organizer for Bernie Sanders. Her work experience is apparently limited to waitressing and bartending. So what qualified this 28 year old "activist" to likely be in Congress? Well she is female (one checkmark on the oppressed checklist) and she is Hispanic (that is another checkmark on the oppressed checklist). She is also an unabashed socialist. That is really it. Following the example of Barack Obama as a politician with no significant real world experience besides "community organizing", Ms. Ocasio-Cortez is poised to be the youngest woman to ever serve as a U.S. Representative.

A lot of people, especially conservatives, focus on her socialist positions like Medicare for all (even though it is already going to be insolvent very soon) and "guaranteed" jobs, which seems like a problem since we already have tons of available jobs and millions of people that politely demure from taking them. But this is 2018 and in 2018 all politics are identity politics. I don't think Ms. Ocasio-Cortez won because of her tired socialist sloganeering. I think she won because she was young, female and Hispanic and Crowley was a generic white Irish Catholic man.

The Democrats have largely abandoned white men and in return white men have largely abandoned the Democrats. White men voted around 2-1 for Donald Trump in 2016 and I think that advantage for Republicans among white men will continue to climb, just as it falls for Democrats. Democrats are actually OK with this. Their electoral strategy is to continue to cobble together a disparate coalition of groups that have only one thing in common: some sort of animosity toward white men. Their thought process is simple and actually makes sense: as the country becomes less white, they stand to win more elections by positioning themselves as the anti-white male party and building their coalition that way. What exactly does a wealthy homosexual couple in San Francisco have in common with a black single mother in Detroit? Pretty much nothing unless you can convince them that while they may not share common problems, they do share a common enemy: white men.  If you are a woman, you are oppressed by white men. Vote Democrat. If you are black, you are oppressed by white men. Vote Democrat. If you are Hispanic, you are oppressed by white men. Vote Democrat.

That is really what the immigration debate is about. It is not about kids being separated from their families or any of that. It is about importing new voters to vote Democrat. I believe it is also what "Black Lives Matter", the nonsense about the gender wage gap, the endless yammering about "white supremacy" and "white privilege"  and most other liberal talking points are all about: creating a bogeyman to get voters to the polls. The message to women, homosexuals, blacks, Muslims, Hispanics, etc. is all the same: your life sucks and white men are to blame. Go vote Democrat.

Look at the Democrats leadership. Nancy Pelosi. Maxine Waters. MAXINE WATERS! Kamala Harris. Elizabeth Warren. Stormy Davis. All of the energy and focus is on women and/or minorities. Sure Chuck "Crocodile Tears" Schumer is the Dems Minority Leader in the Senate but he is Jewish so he gets half an oppression checkmark. I am 100% certain at this point that the Democrats nominee to oppose Trump in 2020 will be a woman, a minority or both. Joe Biden? Please. Too old, too male, too white.

For me this is the real story behind the win of Alexandria Ocasio-Cortez. It is not her socialism, it is that identity politics has such a hold on the Democrats that even powerful, entrenched white men in the party are not safe from being replaced. If you can't claim some sort of category of oppression, you have no future in the Democratic Party. Even though union leadership is still 100% sold out on the Dems, the rank and file seem to be abandoning the Democrats in droves. If you are a heterosexual white male the Democrats really have nothing to offer you and what is more they have no use for you.

For the foreseeable future everything will be identity politics. The only real question is whether or not we all come to realize it.
Posted by Arthur Sido at 10:49 AM