The Free And Independent Republic of California 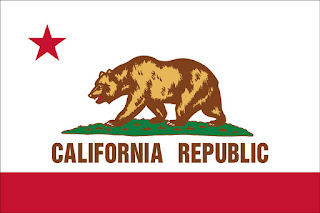 The news came out this week that California is now the world's 5th largest economy:

California’s economy has surpassed that of the United Kingdom to become the world’s fifth largest, according to new federal data made public Friday.

California’s gross domestic product rose by $127 billion from 2016 to 2017, surpassing $2.7 trillion, the data said. Meanwhile, the UK’s economic output slightly shrunk over that time when measured in U.S. dollars, due in part to exchange rate fluctuations.
------
California’s economic output is now surpassed only by the total GDP of the United States, China, Japan and Germany. The state has 12 percent of the U.S. population but contributed 16 percent of the country’s job growth between 2012 and 2017. Its share of the national economy also grew from 12.8 percent to 14.2 percent over that five-year period, according to state economists.

Given that California is politically and culturally wildly different from much of the U.S. as a whole (Hillary won California by over 4 million votes, accounting for her entire popular vote margin), and has an enormous economy that rivals or outpaces most industrialized nations, why not spin it off into an independent nation? Many people in California seem miffed that their two Senators have as much power as the Senators from places like Wyoming and Rhode Island. In spite of their massive vote numbers they only get a proportional number of electors for President.

As a first step in dissolving the Union, why not bid California farewell and let them become their own nation, say in ten years or so? That would give people who want the sort of government California has to move in and those in California who want to stay in the Union to move out. Given the evaporation of the Californian middle class which has been replaced by a massive number of low income, frequently immigrant and often illegal alien, population with a small and extremely wealthy oligarchy, it would be interesting to see how California would do with a massive social welfare state on their own.

People in California already functionally and culturally live in a different country than the rest of us. When I see news out of California it doesn't sound like anything I recognize as America already. Why not make it official and free the people of California from the rest of us and in turn free us from them? The only thing keeping us together now are some legal bindings, nostalgia and inertia. Those three factors are insufficient to sustain a nation.
Posted by Arthur Sido at 3:06 PM

Email ThisBlogThis!Share to TwitterShare to FacebookShare to Pinterest
Labels: dissolving the union