Peace On The Korean Peninsula? 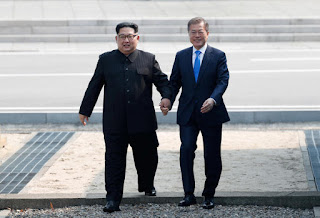 It was a surreal moment on Friday when North Korean dictator Kim Jung Un stepped over the symbolic border and crossed into South Korea holding hands with South Korean President Moon Jae-in. At 46 years old the perpetual state of war between South and North Korea was firmly in place long before I was born and there was no reason for me to think that would change during my lifetime. But here we are. Now, a lot can go wrong of course. This may be a ploy by Kim to buy time for his nuclear program or he may be looking for a handout but at this point the indications are that this is sincere. I have to admit that watching the video that morning got me a little emotional. Could this really be happening?

If peace can break out on the Korean peninsula, maybe the two nations can be reunited into one Korea at some point? Like the Korean war, I also assumed that East and West Germany would always be divided and hostile to one another but then while I was in high school the wall fell and eventually the two nations were reunited. Today some of the divisions can still be seen politically but for my kids Germany has always been just Germany, not West and East Germany. Likewise the break-up of the Soviet Union seemed impossible but then seemingly overnight it happened and today we take for granted that Russia and Ukraine, in spite of contemporary hostility, along with the other former Soviet states, are now independent nations. So if that can happen, why not a unified Korea?

Unless you are a progressive or member of the media (but I repeat myself), it is pretty clear that this whole historic event is largely, but not entirely, the result of the Trump's hardline foreign policy. I am sure pressure from the Chinese, also driven by Trump, helped but Trump's bellicosity seems to have been the language that Kim understood. One can try to deflect all you like but you have to ask this question: if anyone other than Trump was President, would this have happened? If you are being honest, the answer is almost certainly no.

I suggested on Friday morning two things should happen as a result of this turn of events. First, Trump should be given the Nobel Peace Prize and second, U.S. troops should come home from the Korean peninsula where they have been perpetually for over 60 years. The first will never happen, remember these are the same people that gave the Peace Prize to Barack Obama just for showing up, making the Nobel Peace Prize into the Nobel Participation Ribbon. It is more likely they will give the award to Kim, or his sister or anyone else because giving it to Trump is something the committee couldn't possibly stomach. The second might happen though. The 23,000-28,000 troops the U.S. has in South Korea could easily be recalled and I would expect that if the peace process continues that the removal of our troops from South Korea will become a negotiating point. I am all in favor of bringing them home, along with our troops in Germany and Japan, as well as the Middle East. I would rather have 20,000 armed guards on the southern border than 20,000 soldiers sitting around on their collective butts in South Korea. Or better yet we could try not spending that money at all but that is nothing but a fanciful dream.

I don't know Kim Jung Un's true motivations and neither does the media and neither do you (unless you are reading this Kim.....). Probably a lot had to do with the idea of regime change coming to North Korea if he kept acting out. I would suspect that looking at the wealth of China and desiring to see some of that come his way was another factor. Being a closed hermit kingdom makes you totally in control but it also limits how much wealth you can accumulate and with China poised to become the world's largest economy, while retaining a form of communism, Kim might see that opening up to the world could mean vast riches for himself. Maybe he just had a change of heart. My wife sees Kim as a little kid that just wants some attention and even a little discipline and I think there is some truth to that. It is likely that Kim spent some time as a child studying in the West, perhaps that left a desire to see some liberalization come to his nation. Whatever his motivations, having peace on the peninsula and a de-escalation of the hostile stance of the two Koreas is a positive step, one I was uncertain I would ever see without the necessity first of a major conflict to remove Kim that would have led to massive loss of life on both sides. One less global hotspot in a state just removed from open warfare is something that everyone can and should celebrate.
Posted by Arthur Sido at 8:16 AM