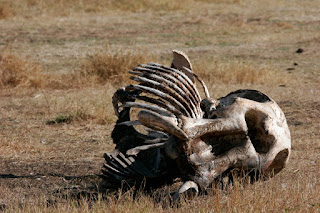 Trump didn't kill it, although that is the popular finding of amateur autopsies. It was dead long before he came on the scene. What killed conservatism is what once gave it life. Conservatism today lacks any sort of unifying principles other than being against "liberalism". The Soviet Union is gone and with it the main unifier of big business capitalists, Christian conservatives and libertarians. Conservatism now is little more than screeching about the latest outrage from liberals with no real plan other than being outraged again tomorrow.

What does it even mean to be conservative today? In essence almost all of conservatism is simply a delaying action against "progressive" policies. And it is important to note that it is simply a delaying action, a lackluster fighting retreat. Our principled stand of today is gone tomorrow and the unthinkable territory has now become the new front lines. Conservatives are not really even talking about unwinding liberal policies, and are instead just endlessly redrawing the battle lines.

At the once venerable and now mostly tired and predictable National Review, author  J. J. McCullough writes that it is Time for a Compromise on Transgenderism. What? He suggests that calling people by the appropriate pronoun is "boorish and petty" and seems to think that if we just compromise on this issue a little, the Left will leave us alone in our churches. What a buffoon! Anyone paying any attention at all recognizes that this is an all-or-nothing fight. Either you go all-in on embracing whatever perversion and deviancy the Left demands or you get squashed like a bug by the media, entertainment industry and legal system. The same is true on issues like race, amnesty and feminism. If you aren't for reparations you might as well be lynching black folk again. There is no room for comprise.

This from the magazine that once was led by William F. Buckley, Jr. who famously said in 1955 "A conservative is someone who stands athwart history, yelling Stop, at a time when no one is inclined to do so, or to have much patience with those who so urge it.". Now we are urged to compromise on just one more issue and at last we can have peace. This is the same lie that is destroying the Boy Scouts which will cease to functionally exist soon and has already destroyed mainline Protestantism through endless "just one more" compromises.

Mr. McCullough got some push-back from his fellow NRO writers but the very notion that what he wrote could show up on the pages of National Review is staggering and a sign of just how far the conservative movement has fallen.

Chest-thumping about how conservative you are and hollering at them lib'rals is fine for the carnival barkers on talk radio and Fox News but it isn't a coherent political ideology. Something new seems to be emerging on the Right and the 2016 election was a sign, not a cause, of it. While it still holds sway in D.C. think tanks and on Capitol Hill, old policies like "free trade" and endless nation building, spreading democracy via cruise missile, are not what is driving the new Right in America. The New Right is far more populist and less elitist, and includes a lot of people that once were solidly Democrat voters in places like the Midwest (see: Is the Midwest the Next South for the Democratic Party? ). I have often argued that in our contemporary setting all politics are identity politics but one identity isn't allowed to notice or be involved. However I think that part of that is changing and the one identity that dare not speak up for itself is unifying, at the ballot box if not out loud. The Democrats coalition is basically the very wealthy elites, minorities and a collection of crackpots and deviants (environmental nuts, wannabe socialists, radical abortion supporters, homosexuals/cross-dressers, etc.). That is the horse they have hitched their wagon to. So what does that leave? Pretty much just working and middle class whites, especially those with strong religious beliefs. We try to pretend that elections are the living out of arguments about concepts and convictions but what they really are in most cases are conflicts based on turnout among identity groups. Will white working and middle class voters in the South, Midwest and West turn out? Is the black and Latino vote energized? To the extent that the answer to one or the other is no, that is how elections are decided.

The anti-Soviet coalition of big business, religious conservatives and libertarians is dead and has been for some time. What is emerging in its place is something that looks very similar but is united by a very different set of priorities. It is not precisely conservatism as we have understood the term but it does have a conservative element of wishing to preserve the U.S. with our uniquely adapted and modified but nevertheless Western European flavor. In general this new populist/nationalist movement has been met with disdain and hostility from more mainline "conservatives" like National Review but it is the future of the Right in this country. In my own state of Indiana two solidly conservative Congressmen were upset in the nomination for the GOP Senate race. Roy Moore in Alabama last year was another example as were any number of other primary wins by "outsiders". The traditional platform cookie cutter Republican candidate is a dying breed as the electorate is looking for something more than an interventionist foreign policy and capital gains tax cuts. Maybe the Republican party will wake up to this shift or maybe something new will replace the GOP. It has happened before and it can happen again.

So join me in throwing a shovel-full of dirt on the rotting corpse of the elephant. Once "conservatism" is dead and buried we can get about the business of forging a new path for the Right in the political landscape before it is too late.
Posted by Arthur Sido at 1:05 PM