The left-wing site Vox published a fairly even-handed examination of the Waco/Branch Davidian massacre in response to the 25th anniversary, The Waco tragedy, explained. Waco, along with the Ruby Ridge siege a year earlier, were important milestones for me, taking place while I was in college and starting to form my own political beliefs. What they taught me is that the Federal government has no problem with using lethal force against those it considers far enough outside of the mainstream to kill with impunity. Certainly there were serious issues with the Branch Davidians and Randy Weaver was set-up by the government but nothing was going on in Waco that warranted the wholesale slaughter of 80 people. 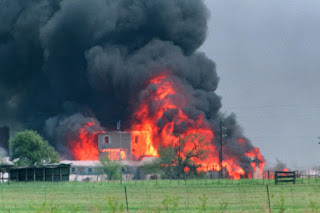 What I found critical in the article is the way that a designation of "cult" can make it easier for the government to get away with actions that would be unthinkable in more mainstream settings:

The media tended to legitimized the FBI’s raid on Mount Carmel — despite its disastrous outcome for many innocent members of the Branch Davidians, including children — because Waco was a “cult.”

But all too often, notes Dr. Megan Goodwin, a visiting fellow at Northeastern University specializing in American minority religions, the term “cult” is used to delegitimize and diminish religious practices that don’t fit neatly into the American (Christian, often Protestant) mainstream, and justify violence that would not be used against more established religious groups.
----

“When journalists and law enforcement agents use the term ‘cult’ to describe a religious group,” Wessinger writes, “it’s problematic. In fact, studies have shown that once the ‘cult’ label is applied, the group is more likely to be deemed illegitimate and dangerous. It’s then easier for law enforcement agents to target the group with excessive, militarized actions, and it’s easier for the public to place all blame on the supposed cult leader for any deaths.”

The fact that it was so easy to diminish Koresh and his followers as “unworthy victims,” she adds, made it that much easier for the public to accept their deaths. “Religion is a constitutionally protected category. ... And the identification of Waco’s Branch Davidians as a cult places them outside the protections of the state.”

A lot of people look at the Branch Davidians and believe that they got what they had coming to them. They were kooks who didn't fit into our acceptable religious boundaries and so whatever happened to them was no big deal, even though a lot of kids died. It sort of reminds me of the way we collectively shrug our shoulders when a drone strike goes awry and kids get killed. The parents were probably bad people so those kids are just "collateral damage" in our endless meddling war on terror in the Middle East. You gotta break a few eggs if you want to make an omelet and all that.

What a lot of people seem to not understand is that the gap between the government's perspective on the Branch Davidians and your run-of-the-mill Baptists is shrinking. There are already far too many people, especially younger people, who seem to think that not being offended trumps the First Amendment and the precious protections of our natural rights are in more danger than at anytime in recent history. Belief in traditional marriage and opposition to homosexual behavior is, for now, protected speech but all it takes is one court ruling saying otherwise and devout, conservative religious groups can find themselves out in the wilderness pretty quickly. If you think it couldn't happen here because "Muh First Amendment!", just look at the creation of the "right" to homosexual "marriage" whipped up out of thin air. These days the Constitution only means what the courts say it means.

I don't believe what the Branch Davidians believe and I don't agree with Randy Weaver about a lot of things but I also don't want the government burning little kids alive and shooting a woman holding a baby in her arms because the government doesn't like what someone believes. When the government and the media decide you are part of a cult, your rights seem to go out the door. Can we be too far away from a day when teaching kids that homosexuality is sinful and a literal interpretation of Revelation will get you labeled a cultist and invite cops in body armor and automatic weapons to kick down your door? Don't ever let yourself believe the lie that it can't happen here. It already is.
Posted by Arthur Sido at 8:51 AM