More On The Skilled Trades Gap

Following up my previous post about the need for skilled labor in the Midwest comes a story from NPR, High-Paying Trade Jobs Sit Empty, While High School Grads Line Up For University. NPR isn't exactly the radio station of choice for skilled tradespeople so it is kind of an interesting choice for them to run an article which seems to run counter to what you would expect from the highly education class of people that make up public radio's audience.

While a shortage of workers is pushing wages higher in the skilled trades, the financial return from a bachelor's degree is softening, even as the price — and the average debt into which it plunges students — keeps going up.

But high school graduates have been so effectively encouraged to get a bachelor's that high-paid jobs requiring shorter and less expensive training are going unfilled. This affects those students and also poses a real threat to the economy.

The article interviews several young skilled tradespeople, including a 20 year old steel worker, making $50,000 or more annually. In fact as the article points out there are millions of these jobs:

In all, some 30 million jobs in the United States that pay an average of $55,000 per year don't require bachelor's degrees, according to the Georgetown Center on Education and the Workforce.

Making $55,000 or more while not carrying about $55,000 or more in student debt is a pretty good deal. Sure these jobs can be physically difficult and you get dirty but there isn't much glamor to be found sitting in a cubicle watching yourself slowly die.

Of course, this being NPR, there has to be an obligatory nod to the specter of "racism" or what they refer to as "tracking":

These perceptions fuel the worry that, if students are urged as early as the seventh grade to consider the trades, then low-income, first-generation and ethnic and racial minority high school students will be channeled into blue-collar jobs while wealthier and white classmates are pushed by their parents to get bachelor's degrees.

"When CTE was vocational education, part of the reason we had a real disinvestment from the system was because we were tracking low-income and minority kids into these pathways," Kreamer said. "There is this tension between, do you want to focus on the people who would get the most benefit from these programs, and — is that tracking?"

What utter nonsense. "Tracking" sounds to me like "helping kids assess the best career path", something high schools should be doing instead of just shoving kids into the college path. By any measure minorities, especially blacks, struggle mightily in four-year schools. Look at this chart on improvements in graduation rates for blacks and whites in college from the Education Trust posted by U.S. News & World Report, The College Graduation Gap Is Still Growing: 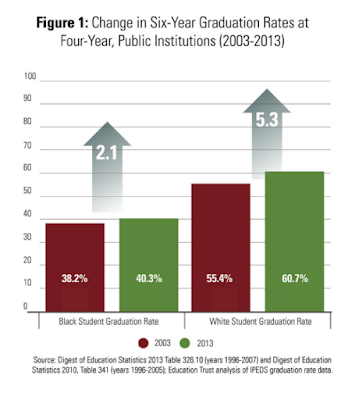 So as of 2013, after six years only 40% of black students at public colleges and universities have gotten their degree. It is highly probable that the 60% who haven't completed college after six years never will.

Which is worse: a) pushing minority kids into college where they are much more likely to fail and come away with nothing but debt or discouragement or b) running a risk of "tracking", which in this case means encouraging minority kids to get job skills that lead to high paying, worthwhile employment? It seems to me that the greater disservice by far is to discourage or at least withhold encouragement from them to attend trade school to learn a skill than it is to not sufficiently encourage them to go to college where only 2 in 5 actually graduates. Are we doing a service to black kids by sending them to college to make white liberals feel better about themselves?

A partial college degree doesn't do anything for you in the workforce. In fact if I was interviewing someone who said they went to college for 5-6 years and still didn't graduate, I would wonder about their ability to meet deadlines and complete tasks. As for "first generation", i.e. children of immigrants I assume, what better way to integrate them into America than for them to learn a skilled trade?

It is a pretty good article, linked to on Facebook by America's number one advocate for skilled trades, Mike Rowe. Given all the resources for people to get into the trades, it should be an easy choice for kids who just aren't interested in college.
Posted by Arthur Sido at 1:30 PM