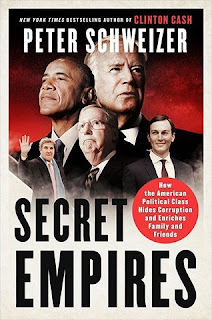 Peter Schweizer does it again with his newest book Secret Empires. In previous books like Clinton Cash (my review) and Extortion (my review), Schweizer detailed how the Clintons used Hillary's position in the Obama administration to garner massive wealth through their fraudulent "family foundation" as well as how politicians extort money from the very special interests we are supposed to blame for Washington corruption. In his latest book he takes aim at how family members of the powerful political elite use their family influence to gain wealth from foreign powers, a type of influence selling that is not technically illegal because Federal disclosure laws don't cover the family members of Federal employees and elected representatives.

The examples are equal parts stunning and infuriating, nowhere more so than in the massive business deals landed by Hunter Biden and Christopher Heinz, the son of then Vice-President Joe Biden and the stepson of then Secretary of State John Kerry respectively, with the Chinese government, among other equally dubious sources. Often traveling in tandem with their elders, these two young men inked major deals with foreign government affiliated firms, often almost simultaneously with high level diplomatic talks between that government and the United States. For details check out this report from the New York Post.

The Obama administration came out looking pretty bad as well. The Obama administration touts itself as the most transparent and scandal free administration in modern history, an opinion the fawning media was more than happy to reinforce. The reality as Schweizer uncovers is far less positive. Buddies of Barack Obama profited handsomely from "smash and grab" actions in industries targeted by President Obama, industries like coal, oil, for-profit colleges and "payday lenders". In case after case, friends of Obama made out like bandits thanks to heavy-handed regulations from their pal's administration.

Schweizer didn't leave Republicans alone. Senate Majority Leader Mitch McConnell and his wife Elaine Chao were exposed as having very questionable dealings, again with high ranking and connected Chinese officials. Other Republicans also were exposed but there is a distinct Democrat flavor to the charges of corruption, perhaps due to the recent 8 year Obama administration and perhaps due to other factors. Schweizer also takes time to point out possible vulnerabilities with the Trump administration and especially Trump son-in-law Jared Kushner, who seems to have a knack for poor financial decisions. Given the scale and scope of the Trump holdings, especially in foreign nations, it is clear that great discretion and transparency is called for.

Ultimately in my opinion the problem is not a lack of rules and regulations, although more could be done in that respect. The real problem that Schweizer doesn't really touch on is that our Federal government handles far too much money and power, and that kind of money and power is bound to attract people who will use any means necessary to get their hands on it. To eliminate corruption in Washington, take away the Federal stranglehold on so much of our economy. When the money dries up, the corrupt will seek greener pastures. As long as the government allocates trillions of dollars every year, people like Hunter Biden will be drawn to it like moths to a flame. Snuff out that flame and the moths will go away.
Posted by Arthur Sido at 3:51 PM