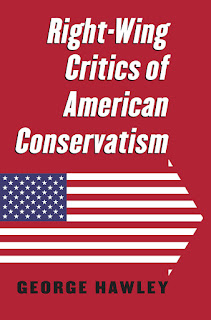 George Hawley’s Right-Wing Critics of American Conservatism, hereafter RWC, is a look at the various and disparate groups on the political right that are in some or many ways opposed to the general “conservatism” of the American political scene. Based on the language Hawley used I was assuming he was a more typical liberal-leaning academic but I since discovered that he occasionally writes for The American Conservative and I have read several of his pieces without registering that he is the same author. I still would classify Hawley as somewhere to my left but with some reasonable conservative credentials.

It can be easy, especially as of the publication of this book, to see conservatism and the right-wing as synonymous but Hawley does a good job of unpacking the way right-wing thought has evolved into the current uneasy and unequal alliance in the Republican party of social conservatives, neocon war hawks and business interests. Of special interest are the various purges Hawley details and the role of National Review in deciding who won and who lost in the ideological battles of the right. I was especially interested in the war between the paleoconservatives and the neoconservatives as someone who finds himself far more in line with paleo positions than neocon positions, even though neocons completely control the conservative movement and the Republican party.

One of the jarring aspects of RWC is that it makes no mention of Donald Trump. It is a testament to just how powerfully Trump has changed the landscape politically that a book published in March of 2016, seven months before his election, makes no mention of him and yet in the year and a half since his election there has hardly been a political story that doesn’t blare his name from the headlines. Another notable absence that seems hard to believe is the lack of mention of the “alt-right”, a sizable right-wing group that helped, at least for a short time, to coalesce much of what Hawley labeled the radical right in his books. Several leading voices of the alt-right appear in RWC without the label. It is incredible how much the right-wing landscape shifted in the two years that have passed since RWC was published in March of 2016. Hawley has subsequently written a book on the alt-right specifically.

For me one of the most useful features of the book was introducing me to right-wing figures that I hadn’t heard of before, coming as I do from a fairly generic conservative background. It was not unusual for me to stop every few pages and look up a right-wing author that I hadn’t heard of before and several books Hawley mentioned are sitting on my desk to be read next, and many more are flagged to read on Goodreads.

Hawley does stretch a bit with his inclusion of the European New Right, as I don't think that outside of the alt-right there is much influence at all on American conservatism from that movement, primarily for the reasons Hawley details including a strong bias from the European New Right to be anti-American and anti-religious. I think the main three movements that stand in contrast to the dominate conservative thought (paleoconservatism, libertarianism and the radical right) are far more influential than the European New Right or the localist, "crunch con" movements but I appreciated reading about them all the same.

Hawley’s  Right-Wing Critics of American Conservatism is mostly a look back at the recent history of right-wing thought in America but it is useful for those who are looking to the future of right-wing thought as the uneasy and rather fragile alliance between the social conservatives, neocon war hawks and business interests is badly fractured and getting worse. For me personally I think that paleoconservatism, relegated to the pasture for some time now, has the potential to unite the social conservative right and the working/middle class vote in the coalition Trump won with in 2016. With Republican voters becoming uneasy with “free trade” and venues like CPAC welcoming speakers like French nationalist Marion Marechal-Le Pen, coupled with the platform of “America First” that Trump ran on (even if he is not governing that way consistently), there might be an opening for a more populist, nationalist expression that can make permanent the on-again, off-again alliance that helped Trump win and that has existed since the era of “Reagan Democrats” in the 80’s. RWC is a solid reference guide to anyone that wants to learn more about the right-wing in America beyond National Review and AM talk radio and knowing more of our history has helped open my eyes to the potential future of the right-wing in America in the years to come.
Posted by Arthur Sido at 9:15 AM