Book Review: The Case Against Education 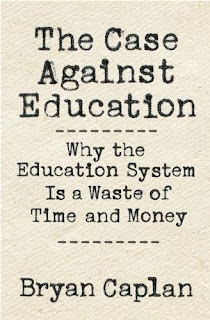 Recent years have seen the start of a backlash against the American article of faith that demands you accept that our educational system is the most important function of government and that a four-year degree is the one and only golden ticket that grants the holder admittance to the middle- and upper- class of American society. More and more people are questioning the wisdom and truth of this insistence on a singular path to prosperity as more and more of us have anecdotal evidence of the four year degree holder working as a Starbucks barista and the exploding cost of college that has saddled tens of millions of young adults (and parents) with almost $1.5 trillion in student loan debt. We owe far more to student loan lenders than we do to credit card lenders and a lot of people are starting to question the entire system. We seem to have a glut of overeducated service industry workers and a serious lack of employees with actual job skills.

Into this conversation comes Bryan Caplan with a highly anticipated new book bearing an intentionally provocative title: The Case Against Education: Why the Education System Is a Waste of Time and Money.

Caplan’s basic premise is that education is vastly overrated and a poor investment. Employers demand that potential employees have a four year degree and will pay a premium for that degree even though by any measure that degree does little to prepare the average potential employee for most non-technical jobs in the workforce. Even worse, most of what you learn in school is quickly forgotten. One of the most powerful sections of the book was a look at surveys of what adults actually know after graduating from school and it is painful how little was retained from over a decade of drudgery.

"The overrating is starkest from the social point of view. Students forget most of what they learn after the final exam because they’ll never need to know it in real life. The heralded social dividends of education are largely illusory: rising education’s main fruit is not broad-based prosperity, but credential inflation."

The Case Against Education, pg. 285

My own experience is confirms what Caplan asserts. I spent most of my adult working life to this point in the financial services industry, often managing client portfolios with hundreds of millions of dollars in assets. I have a college degree of course but my degree is from a state school, Bowling Green State University, that is close to where I grew up and had so many of my high school classmates that it was unusual to not see several people I went to high school with in a given week. My degree is not in finance or economics or even general business. I majored in Political Science and I minored in history. I did take several economics classes including one on banking but, and this is crucial, that class never came up in interviews. In fact my college education never really was mentioned at all. It was a  signal to employers. Does the applicant have a degree? Yes he does, so that moves him into the next category of being called for an interview. What I know about financial services, the securities industry regulations, rules for defined contribution plans, etc., I learned on the job. I could have had a degree in something even more useless than Political Science, like Gender Studies, and it wouldn’t have mattered. What mattered to get me an interview was having a degree, any degree, and having some relevant experience. I am sure when I was being interviewed for more senior, highly paid positions later on in my career, the staffing person reviewing my resume mentally noted that I had a degree but didn’t care where it was from or what I studied.

Now at some places where I worked, like large mutual fund or insurance companies, many of the mutual fund analysts had highly technical degrees. These jobs were staffed by people with masters and PhDs from prestigious universities in technical fields but they were the exception rather than the rule. My own job experiences also included working as a bank manager and a couple of short stints in retail management. Out of my entire educational experience the most useful skills I learned, real skills that helped me do my job, came from my time in high school in the Future Farmers of America where I learned skills like public speaking and job interviewing (along with soil and livestock judging, and of course to not weld while wearing no socks). The rest of my education mostly signaled my ability and willingness to submit to rules and drudgery.

Probably my favorite chapter was late in the book and is titled ‘1>0’. In this chapter Caplan speaks to the need for more vocational training, a topic that I wholeheartedly agree with. The cryptic chapter title comes down to this, it is better to teach students how to do one job than it is to teach them to do zero jobs, and most education gives the student essentially zero training to do a specific job. In other words one job trained is better than no jobs trained, or 1>0. Caplan even advocates for school aged kids getting “on the job” training, something that some people see as exploitative even though they don’t see forcing kids to sit in boring classrooms being taught stuff that doesn’t help them and that they won’t remember as likewise being exploitative. Anyone who has been through public schools knows that there are a lot of kids that are just not academically gifted and that are not interested in academics but the entire public school system is geared to forcing them into a four year degree program. Likewise anyone who has attended an average college or university knows that there are a ton of students that are there just for the sake of being in college and who, if we are being honest, have no business being there. Forcing kids who don’t have the interest or aptitude into a four year degree program that won’t provide them with any marketable skills is a disservice to them. For many if not most high school/college aged kids they would be far better served by giving them vocational training leading to decent employment than to drive them into a degree program that gives them no marketable skills. I wish Caplan would have spent more time on this topic but it wasn’t the focus of his book and others have done solid treatments of this issue.

Unfortunately, as Caplan himself admits, this book is unlikely to generate real change. The education-industrial complex in our nation is far too powerful and has the advantage of all the best rhetoric. If you suggest any substantive changes to the education system you will run afoul of the education establishment and the teacher's unions and that usually is that. A deluge of "what about the children?!?!" and teachers complaining about how overworked and underpaid they are and the typical politician will whip out the public checkbook and write in whatever figure they are told. Perhaps someday we will see an economic calamity that will force us to reform education but short of a dystopian novel scenario it is likely that we will keep throwing money down  the sinkhole of "education" and getting worse and worse results.

Kudos to Bryan Caplan for having the courage to write this book. I will close with another great quote, one that should have employers rethinking how they screen applicants:

"We have to admit academic success is a great way to get a good job, but a poor way to learn how to do a great job."

The Case Against Education, pg 289
Posted by Arthur Sido at 7:00 PM